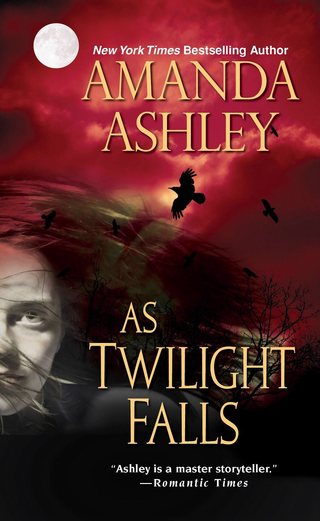 Book 1 in The Morgan Creek Series 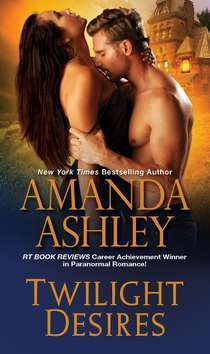 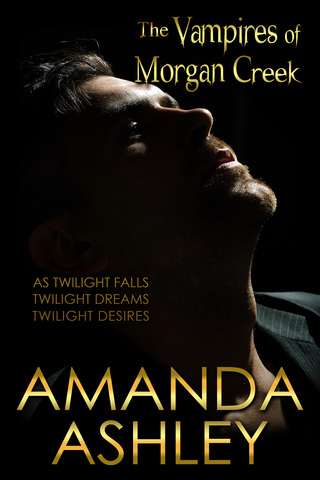 Publishers Weekly said ~ “Ashley’s sequel to As Twilight Falls is a tender paranormal romance exploring love and family ties, and it’s tinged with intrigue and vengeance. After meeting in a southern California bar, grieving vampire Micah Ravenwood and vivacious, logical investment broker Holly Parrish revel in their mesmerizing attraction to each other. When Micah senses imminent danger from a revenge-seeking vampire, he whisks Holly to the ghost town of Morgan Creek, Wyo., putting their relationship in crisis: Holly’s world is turned upside down when she learns that Micah is a vampire, and she’s now the only human living with three vampires in the abandoned town. Heartfelt discussions regarding Holly’s mixed feelings about vampires (curiosity, fascination, revulsion), and Micah’s family troubles and lust for Holly, lead to a compromise that’s upended when Holly is kidnapped. The only way to save her may be to turn her. A cliff-hanger ending nicely sets up the next book. 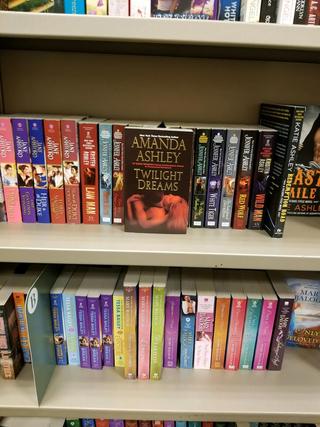 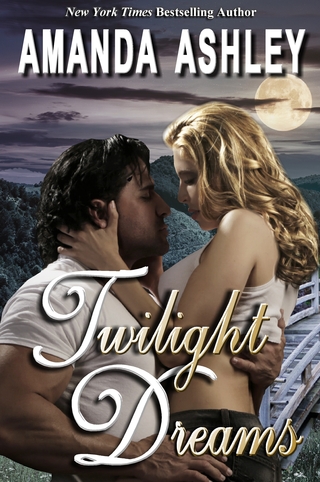 Twilight Dreams was originally published as a short story. However, my NY editor liked it and bought the rights. The updated version has an additional 20,000 words.

When Holly Parrish mistakes Micah Ravenwood for someone else, her life takes on a dramatic and unforeseen turn. She finds herself in the midst of TWILIGHT DREAMS where vampires exist and this gorgeous man is one of them
Micah is a vampire who has survived, thanks to the help of a close friend, Rylan Saintcrow, a very ancient vampire. Micah remembers much of his humanity, he still has his family, who don't know what he has become and now he has the beginning of a sweet romance going with a lovely woman.

Too bad another ancient vampire is hunting his friend and pulling him into danger and by his involvement with Holly she is a target too. Unfortunately, Holly doesn't have time to adjust to the new world she had been thrown into making things very uncomfortable and very worrisome. Holly has to decide if she is still sane and if she could possibly love a vampire ... he's gorgeous and sweet but ... he's dead.

TWILIGHT DREAMS is the sequel to "As Twilight Falls" where we met Rylan and Kadie and in this book we have time to learn more about their lives while Holly works through her worries and fears. Micah also has a few things to think over too and of course we get some very steamy moments while they are both thinking. I have never been disappointed in any of Ms. Ashley's books and this one is right up there with the others. 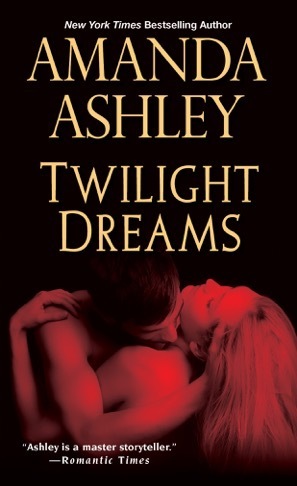 Book 2 in The Morgan Creek Series

Holly Parrish has never met anyone like Micah Ravenwood: his dark eyes, his movie-star smile, the indefinable way he looks at her. Even when she thought he was no more than another client for her investment firm, her lust overpowered her logic.

But she never expected this attraction to whisk her from her busy southern California life to a silent and eerie ghost town in Wyoming. Only vampires call the deserted place home—and one of them is Micah. He says he’s brought her to Morgan Creek for her safety, that vicious creatures are hunting her. But how can Holly trust him? One look and she can see the need barely restrained behind Micah’s polite words. The heat of his kiss, the pleasure of his touch—none of it can tell her whether he wants her as his lover—or his prey…

Micah sat at the long ebony bar inside The Lair. He had been coming here long enough to recognize most of the patrons - women looking for a one-night stand, men looking for a woman -- any woman -- to ease their loneliness for a night or two. He had been in Southern California less than two weeks and already reached the conclusion that coming here had been a mistake. He had been wandering from one Goth hang-out to another in hopes of finding a lady vampire, someone to take his mind off his loss, his loneliness, but if there were any vampires here, he hadn’t been able to find them. The state seemed to be filled with nothing but movie stars, wanna-be movie stars, surfers and beach bunnies.

He was about to leave the club when he saw her -- a young woman who stood an inch or two over five feet. Long blonde hair fell in soft waves past her shoulders. Even in the dim light, he noticed her eyes. They were an unusual shade of blue, almost turquoise. Contact lenses, perhaps? A gray sweater and a pair of blue jeans caressed a petite but perfect figure. He guessed her to be in her mid-twenties.

She glanced around the bar, obviously looking for someone. To Micah’s surprise, she waved a hand in greeting when she saw him at the bar and hurried toward him.

“Pleased to meet you, Miss Parrish. Can I buy you a drink?”

“A vodka martini, please,” she said, taking the stool beside his.

Micah relayed her order and asked for another glass of wine for himself. “Holly,” he murmured. “I’m guessing you were a Christmas baby.”

“Good guess.” She smiled that enchanting smile again. “Mr. Gladstone is very anxious to have you on our team. He’s prepared to offer you twice what Lindor-Beakman is offering, along with the usual perks, of course -- a company car, a three-week vacation, and the best health insurance on the market.”

Micah sipped his wine. “I must admit, it sounds like a very generous offer.”
She nodded. “You won’t find a better one.” Lifting her glass, she took a swallow.
His gaze moved to her throat, his nostrils filling with the warn, rich scent of her blood, the flowery fragrance that clung to her hair and skin, her perfume. The faint, musky scent of woman. She might be short and petite, he mused, but she was all female.

Setting her glass aside, she licked her lips. “So, if you’re willing to accept Mr. Gladstone’s offer, we can close the deal right now. I have the papers in my bag.”
“I’d be more than happy to accept, Miss Parrish, if I was Joseph Burke.”

She blinked at him. “Excuse me?”

“I’m not Joseph Burke. My name is Micah Ravenwood.”

“But…you…why didn’t you stop me…? You…you let me sit here and make a fool of myself.”

“Sorry,” he said, smiling, “but I was very much enjoying your company.”
Holly stared at him. She hadn’t paid any attention to his looks before. She was here on business, nothing else. Now, she wondered if there was something wrong with her, that she could sit next such a handsome man and not even notice. Perhaps she needed a vacation! Micah Ravenwood was beyond handsome, with hair so dark a brown it was almost black. His eyes, too, were dark brown, with a hint of mystery. And his mouth…well-defined, sensual. She looked away when she realized she was staring. But who could blame her?

Suddenly uncomfortable, she mumbled her thanks for the drink, grabbed her bag, and slid off the stool, eager to put him and this night behind her.

“I’d love to buy you another round, Holly.”

His voice, deep and dark and as rich as Irish whiskey, stopped her in her tracks.
Holly glanced at the door and then at her watch. She would wait for Burke for another fifteen or twenty minutes and then she was going home to soak in a hot bubble bath. Whiling away the time with Micah Ravenwood certainly wouldn’t be a hardship. It had been months since she’d been out with a man. What harm could there be in having one more drink with the most handsome guy she had ever met? So, she’d made a fool of herself. After tonight, she would never see him again. And sharing a drink with him sounded so much better than spending another Friday night alone in her empty apartment.

“You’re not married, are you?” she asked.

“Then I accept your offer,” she said, returning to her stool.

He signaled the bartender for two more of the same. “So, who or what are Lindor-Beakman?”

“You must be new in California.”

“Sort of. I haven’t been here for several years.”

“Oh. Well, they’re a rather well-known investment firm, and our biggest competitor.”

Micah nodded. “If I’m ever in the mood to invest, I’ll be sure to call you first.”

“So, what do you do when you’re not stalking clients?”

Holly shrugged. “The same things as anybody else. Take in a movie. Read a book. Go for a walk along the beach.”

Micah glanced around. “This seems like an odd place to do business.”

“I thought so, too,” she said with a grimace. “I know it’s all just make-believe, but seriously, why would anyone want to be a vampire?”

“Staying young and living forever might be considered a perk by some.”

“Maybe. But if vampires existed, which, thankfully, they don’t, no one would want that lifestyle. I mean, all the books say they can’t go outside in the sun and they can’t have children and then there’s the blood thing,” she said, grimacing. “All that aside, what’s the point of living forever if you can’t have a family?”

He quirked one brow. “Dozens?”

“I’m an only child. I always wanted brothers and sisters. I don’t intend to let any kids I might have grow up without siblings.”

“That’s an unusual outlook these days when people are marrying later and limiting their families to one or two.”

“Do you want a big family?”

“I never thought about it,” he lied. He had come from a loving family. Once, he had hoped to have a wife and children of his own. That was no longer possible now. He sipped his wine, but it tasted sour on his tongue. “So, who’s the lucky man who’s going to father all those kids?”

His gaze met hers. “Maybe you’re not looking in the right place.”

His voice moved over her like silk, making her think of tangled sheets and warm summer nights. Clearing her throat, she said, “Well, to tell you the truth, I don’t have a lot of time to look. I work all week, spend Saturdays cleaning my apartment, picking up my dry cleaning, doing the laundry…” She shook her head. “By the time Saturday night rolls around, all I want to do is veg out in front of the TV.”

“So, what if I asked you to do all those things on Sunday instead, and go out with me tomorrow night?”

She lifted her glass and took a long swallow. Her first instinct was to say no. Other than his name, she didn’t know anything about Micah Ravenwood. He could be a rapist or a child molester or a con man. These days, only an idiot hooked up with a stranger she met in a bar, especially a bar filled with Dracula wanna-bes.

“I could show you my I.D. if that’ll help you make up your mind.”

“What would that prove? Those things can be easily faked these days.”

He nodded. “True enough. Can I call you sometime?”

“I guess so.” Taking a pen from her bag, she wrote her cell number on a cocktail napkin.

“Thanks, sunshine.” Rising, he took her hand in his and kissed it. “Good luck with the real Joseph Burke.”