My hero, Jarrett, was awarded a K.I.S.S. (Knight In Shining Armor) Award from Romantic Times Magazine. 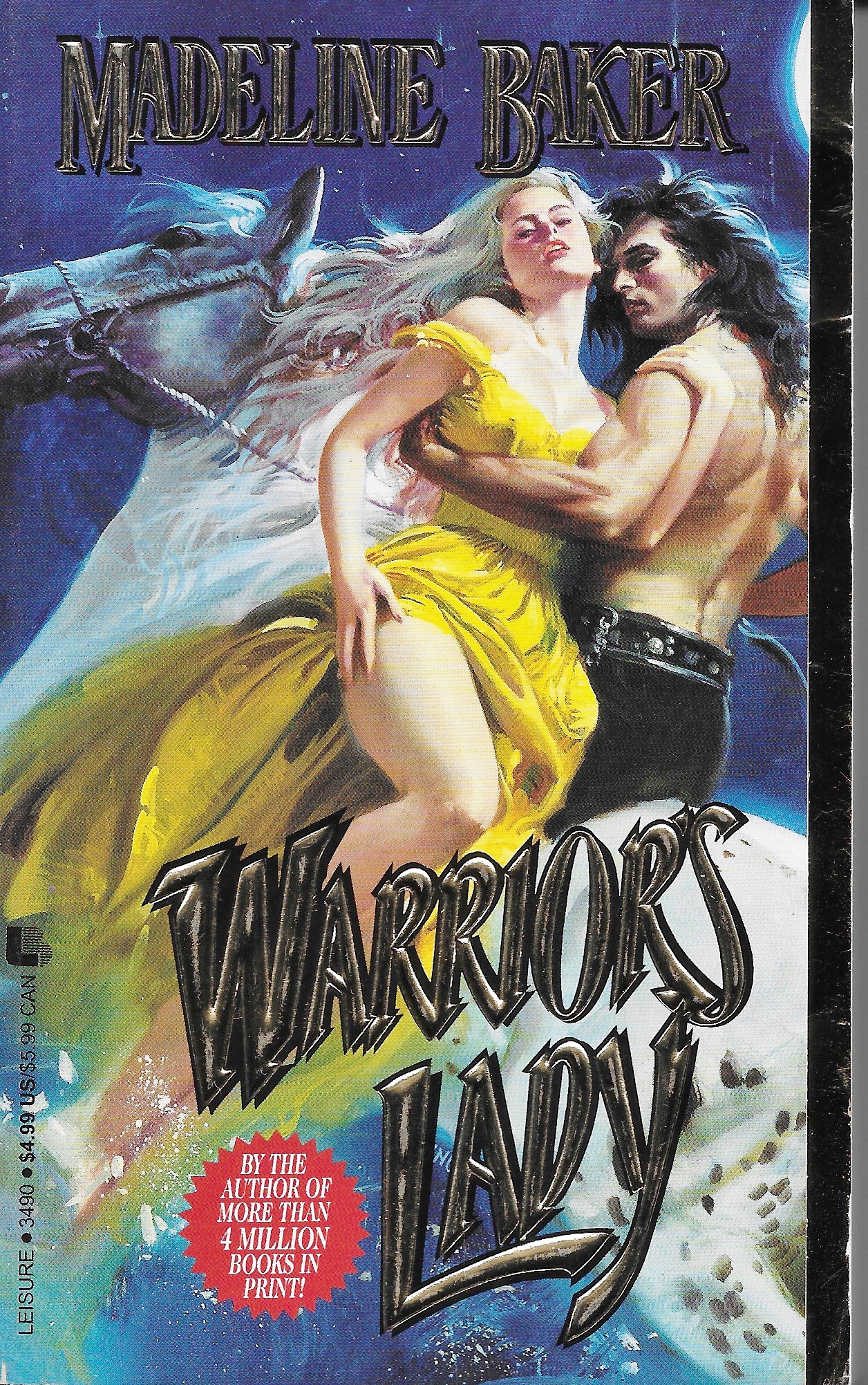 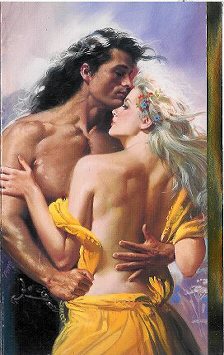 THE TALISMAN said, WARRIOR'S LADY will keep the reader on the edge of her seat. It is a fast paced mystical romance that will call readers' emotions to the surface, as you feel Jarrett's pain, Leyla's love and Rorke's maniacal anger. With its colorful cast of characters, readers are sure to fall in love with WARRIOR'S LADY. It is very reminiscent of some of the beloved fairy tale classics that many of us grew up on. Madeline Baker fans, accustomed to her adventurous western/Indian historicals will be swept away as she delves into and takes the fantasy genre by storm.

ROMANTIC TIMES said,
Madeline Baker, the "Queen of Indian romance" conquers a new genre...fantasy! Readers will be enchanted with Warrior's Lady, a magical fairy tale that is to be devoured again and again."
Maria Ferrer 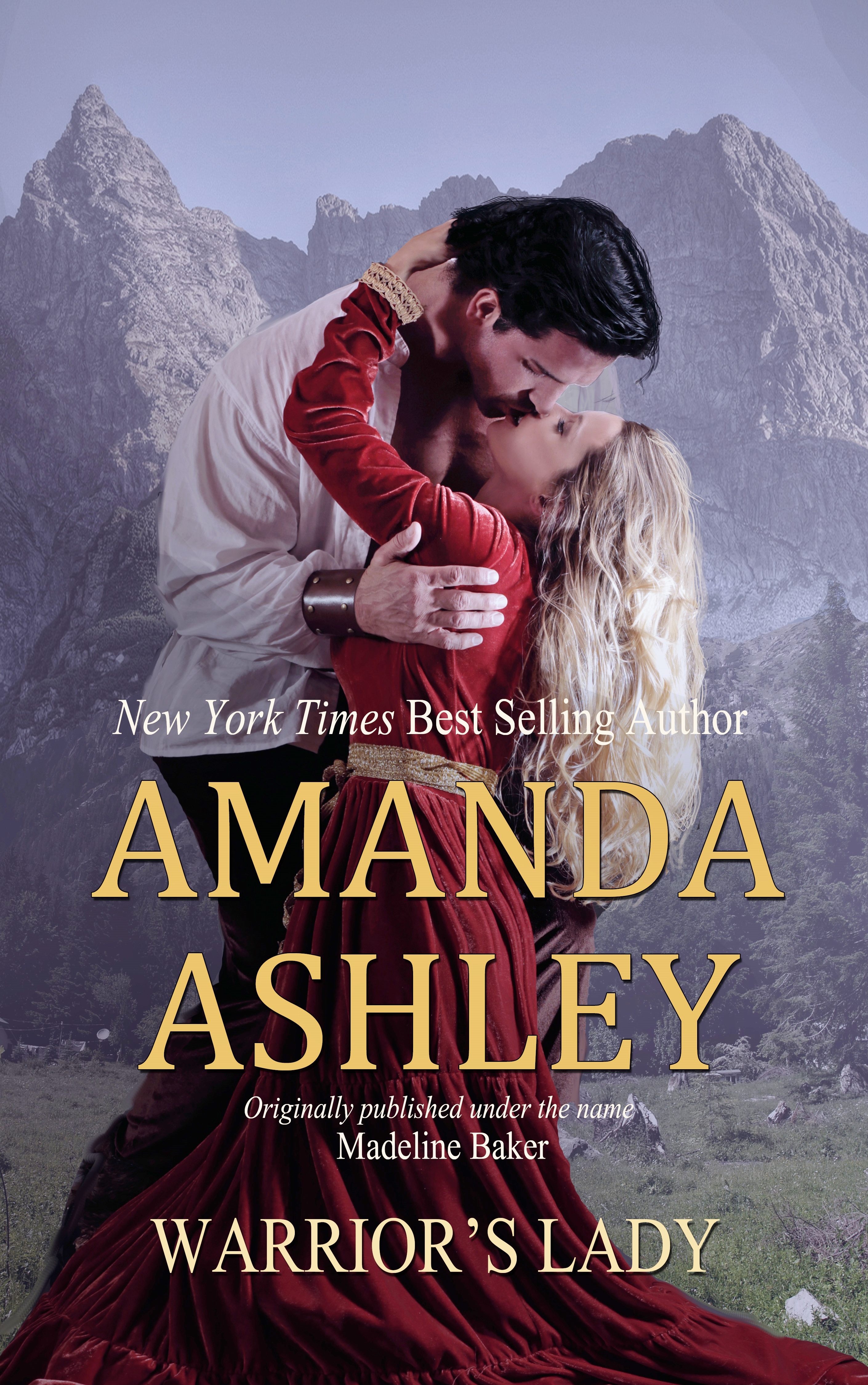 The Warrior
He was everything a woman dreams of in a man - strong, virile, courageous. More at home on the battlefield than in the bedroom, he would give his heart only once and fight to the death to protect his love.

The Lady
A creature of moonlight and quicksilver, she had rescued him from unspeakable torture, then healed him body and soul. She was all he'd ever wanted in a woman - gentle, innocent, exquisitely lovely - but his enemies would do everything in their power to keep her from him. Only a passion born of desperate need could prevail against such hatred and unite two lovers against such odds.

Spread-eagled on the iron-bound table, he tugged against the thick leather straps that bound his wrists and ankles, writhing helplessly in an agony of blood and bruised flesh.

Weeping, cursing, he fell back, his eyes closing beneath the heavy black hood that covered his head and neck like a shroud. The material, created by an ancient Fen wizard, seemed to breathe with a life of its own, allowing air to circulate while completely shutting out the light.

He clenched his fists against the pain splintering through him, praying that he would bleed to death before she came, praying that she would hurry. He could feel the blood dripping from his wounds. Worse than the pain was the weakness, the weariness that engulfed him after defying the Gamesmen for hours at a time.

He yearned toward the mists of darkness that swirled just out of reach, knowing that death was the only escape from the hell in which he lived, knowing that, as much as he desired it, death would not find him this day. His tormentors were skilled at the Games, carefully inflicting wounds that were at times exquisitely painful but never fatal.

Once he had tried to starve himself, but the giants who guarded the dungeon had forced the bitter yellow gruel down his throat by means of a thin hollow tube. It had been a most disagreeable experience, one he had no wish to repeat.

On those days when he was left alone in his cell, imprisoned in the darkness of his cell rather than the eternal darkness of the hood, he longed for the Maje's presence, the sound of her voice. He ached for the touch of her hands, wondering what it would be like to feel her touch, not in healing, but in love.

He was on the brink of oblivion when he heard the door open and she was there. He could feel her presence beside him, the empathy radiating from her in golden waves of tranquility that were almost tangible.

He felt the warmth of her hands moving toward him and he shook his head violently from side to side. "Don't." His voice was weak, uneven, muffled by the hood.

"I must." Her voice was low and soft.

"No." He opened his eyes, wishing he could see her face just once. "Let me die," he begged. But it was a foolish hope, for his wounds, while painful, were not life-threatening. Still, there was always a possibility that he might bleed to death if she withheld her gift.

"Please…" He forced the word through clenched teeth, hating the weakness that made him plead, the misery and exhaustion that stripped him of his courage, his pride.

"I cannot," she said again, and he seemed to wither before her, as if he'd lost all hope.

And perhaps he had, she thought sadly, but she could not let him die. She was a Maje, a healer. She could not see him suffer and refuse to help.

Slowly she laid her hands over the bloody wounds in his chest.

The heat suffused him immediately. Wanting only to die, he tried to fight it, to turn it back, but he was defenseless against the strength of her touch. He felt the healing power flow from her hands, heard the harsh rasp of her breath as she absorbed his pain into her own body, amazed that she would willingly do such a thing. And then he remembered she was a prisoner, as he was, compelled to obey or suffer the consequences.

The heat of her touch increased, seeping down through layers of skin and muscle and tissue, filling him with a strange lassitude. His eyes closed. His body relaxed as she placed her hands on his naked flesh, moving slowly, deliberately, from the most serious injury to the least.

Her warmth and vitality flowed into him, healing, revitalizing, and then the pain was gone and he was whole again.

Whole—to spend another night chained in the darkness, alone.

Whole—to face them again in the morning. He was their toy, an amusement to help wile away the long hours of the dark Hovis winter.

The ancient Games of Skill, originally intended to test the mettle of warriors, had been corrupted, until the Games were no longer a contest of strength and courage, man to man, but a sadistic ritual to see how much a condemned man could endure without breaking. The Games had been outlawed in every province until the Minister of War and his cronies had decided to reestablish them in the Pavilion, which was located in an abandoned walled city located a league and a half from the king's palace at Heth.

How long had he been here? How long since he'd seen the sun, a friendly face, heard anything but the song of the lash and the sound of his own screams? A month? A year? It seemed a lifetime. The only bright spot in his dismal existence was the fact that they didn't play the Games every day.

And yet it wasn't the pain of the Games that made him long for the escape of death, it was the loss of his freedom, the constant darkness of the hood, the awful fear that he was gradually losing his identity.

Time and again he repeated his name as he endured the long lonely hours.

He summoned the image of his ancestral home to mind, mentally walking down each long corridor, through each room. He imagined he was riding his warhorse across the sun-kissed fields. He recalled the smell of freshly turned earth, the light and heat of a summer day, so different from the constant darkness of the dungeon…

He felt her presence withdraw, felt the coldness that always encompassed him when she left the chamber, leaving him there, alone, in the darkness.