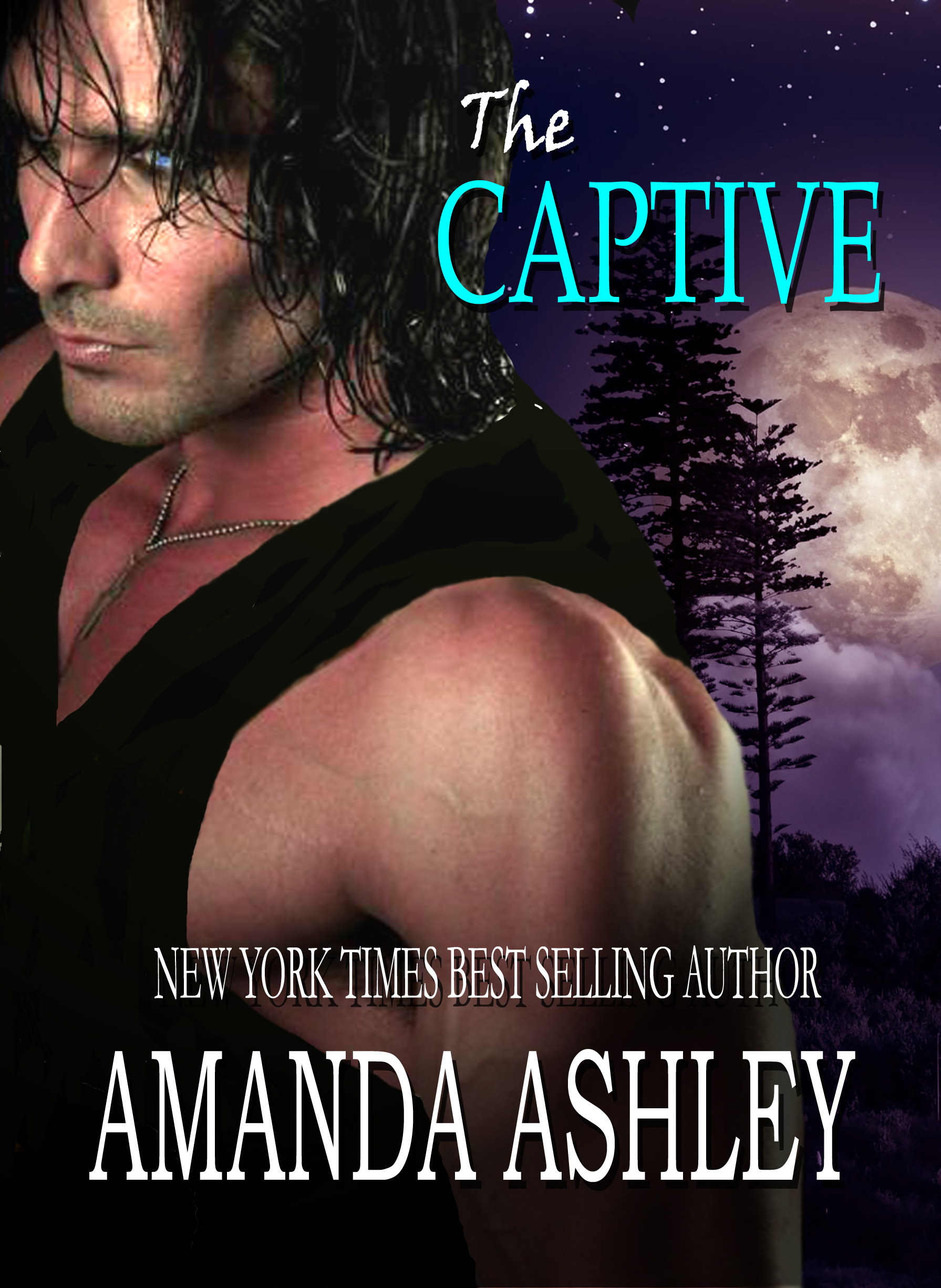 The Captive spirits you away to another world. Literally. This intergalactic, futuristic-set romance is incredible! I adore this story for its dark undertones, fluid and sublime wording and utterly mesmerizing intrigue.

One of the best things about Amanda Ashley's work is that she doesn't shy away from hard truths. In this story she writes of slavery and class distinction. Ashley even hints at youthful ignorance and growing up in the middle of war torn planets.

It's packed full of shocking surprises – some that will leave you utterly gobsmacked and heartbroken and others, such as the love scene later in the book, that will take your breath away with its superb beauty and emotion.  This novel truly keeps you captive to the last page and then will make you weep for more.

This was one of Ashley's books I did not want to end. It was such a creative, realistic, and utterly in-depth story that personally helped me come to terms with a lot of issue buried deep within.

The Captive is a carousel of thrills and adventures. With emotion so thick and divine you can feel every word. 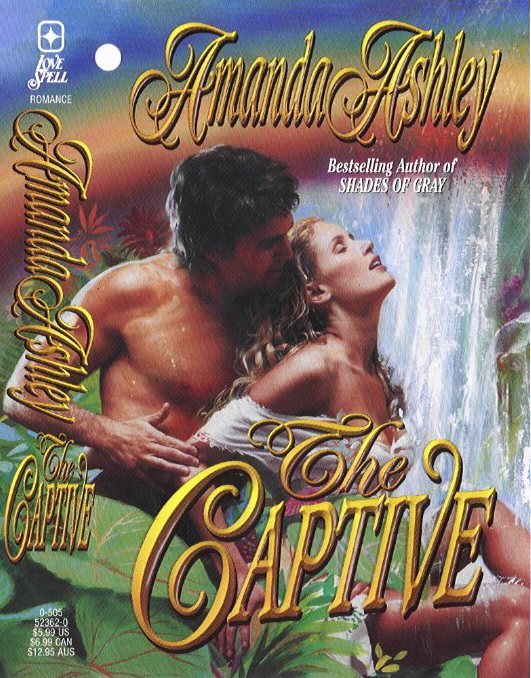 They'd given him a number and taken away his name. Taken his freedom, his home, his family. Everything that made life worth living. But they couldn't take hope...and she came to him looking like an angel with hair the color of silver moonlight and eyes the color of a turbulent sea. She tenderly treated his wounds while he lay in darkness, giving him the will to go on.

But when her father took him from the mine to work on his lavish estate, a new torture faced the prisoner. Daily he was forced into contact with the innocent young beauty, yearning for just one taste of her pouting pink lips. Now, instead of his savior, she became his tormentor as she frolicked in the pool, flirted with other men, teased him beyond endurance. Until one wild night when the world turned upside down and a daring escape made slave at long last master, and mistress...THE CAPTIVE

The first time Lady Ashlynne Myrafloures saw the prisoner who would be known as Number Four, he was nearly naked, lying face down in an ever-widening pool of his own blood. She could not see his face, covered as it was by a tangled mat of long black hair. His back was a broad expanse of bronzed flesh, most of it laid open by the lash. A dirty bandage, stiff with dried blood, was knotted around his right thigh.

She watched in horrified fascination as three of the mine's biggest guards fought to hold the prisoner down while a fourth guard attempted to collar him.

Stubbornly, and surely knowing he could not win, the prisoner struggled to fight them off, his fingers digging into the hard ground for purchase, his whole body trembling violently with the effort it cost him to resist.

Stay down. The plea was a silent cry in Ashlynne's throat.

But he didn't stay down. He went still for a brief moment and she could almost see him gathering his strength; then, with a feral scream of pain and rage, the prisoner surged to his feet, every muscle taut and quivering with the effort, his eyes blazing with defiance as he made a last desperate attempt for freedom.

She cringed as Dain plied the whip with stunning, terrifying accuracy.

The sinuous strip of thick black Parthian leather whistled through the air, laying open the skin on the prisoner's left cheek. It was a cruel weapon, that lash. Her father had often spoken of Dain's skill. Dain wielded it with an expert hand, her father boasted, able to flay a man's back to the bone, or flick a fly from a karu-atar's ear, with equal skill. She had always thought her father was exaggerating, but no more.

As many times as she had heard of Dain's whip, this was the first time she had seen it in action. There were other, less barbaric, more refined methods of inflicting punishment, but her father had always maintained that there was nothing quite so painful, or so devastating to a man's pride, as an old-fashioned flogging carried out in public. It was also, he had once asserted, a remarkably effective deterrent to those who were made to watch.

To her horror, she knew her father was right.

"Dain! Enough!" Parah, chief overseer of the mine, strode into view.

Looking disappointed, Dain let the whip fall to his side.

In the end, as she had known he would, the prisoner lost the battle. She couldn't help but admire his courage even as she wondered at his wisdom. Certainly he had known he could not win; certainly it would have been far less painful to simply submit to the inevitable.

Humbled and bloody, he fought until they forced him down to the ground where they held him down, spread-eagled on his stomach. A hoarse scream of outrage erupted from his throat as a heavy lynaziam collar as wide as the span of her hand was locked around his neck; lynaziam manacles were also fitted to his wrists and ankles.

He would soon learn the folly of further resistance, she thought sadly. Dain had only to activate the controller in his hand to bring Number Four to heel. Pressure applied to the top of the control panel would send blinding pain searing through every nerve and sinew of the prisoner's body; if depressed three times in rapid succession, the result was a slow, agonizing death. Pressure applied to the sides of the controller activated the magnets located within the manacles on the captive's wrists and ankles. Pressure to the left side would cause the thick bands on his wrists to snap together, turning them into unbreakable handcuffs; pressure applied to the right side of the controller brought the shackles around his ankles together, effectively hobbling his feet so that he could neither walk nor run. No man alive possessed the strength to force the manacles apart once they had been activated.

She had been told the cruel restraints quickly brought even the most recalcitrant of prisoners to heel.

There was one more indignity for him to endure. She heard Parah shout "Number Four" and Dain came forward carrying a glowing brand.

A hoarse cry of pain emerged from the prisoner's throat as a large number four was seared into the flesh of his left arm, high up, near his shoulder, and then he was jerked to his feet.

Sickened by what she had seen, Ashlynne was about to turn away, intent on hurrying back to the peace and safety of the jinan, when the prisoner looked up. She drew back, her heart pounding. She was not supposed to be down here, would surely be punished if her presence were made known. Had he seen her?

She peered around the tree she was hiding behind, and his gaze locked on hers. The power of that look, the sheer fury of it, held her spellbound, like a rabbit caught in a trap. She could not determine the color of his eyes, but she could feel them boring into her, as hard as the rocks scattered upon the sea shore. Tortured eyes that burned into her and through her, making her suddenly ashamed of the soft blue velvet of her dress, the white ribbon in her hair, the unblemished gloves upon her unblemished hands. Ashamed because it was the endless toil of men like this one who provided the funds for the outrageously expensive clothing she wore, the fine house in which she had lived her whole life, the very food she ate.

Why had she come here?

She wanted to turn away, to run away, but his gaze held her fast. Never, in all her life, had anyone looked at her as this man was looking at her. Never! She was Ashlynne, daughter of Lady Jadeleine and Lord Marcus Myrafloures. She was accustomed to being treated with deference and respect. But this man, this dirty, bleeding criminal, looked at her with open contempt, as if she were some form of dirt to be shaken from the soles of his feet.

And then Parah activated the collar around the prisoner's neck. With a strangled cry of pain, the slave now known as Number Four dropped to the ground, hands scrabbling at his neck, his body writhing in agony as the lynaziam collar sent hundreds of short, sharp electrical currents jolting through him.

With a soft cry of dismay, Ashlynne lifted her skirts and ran up the path toward home.