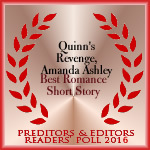 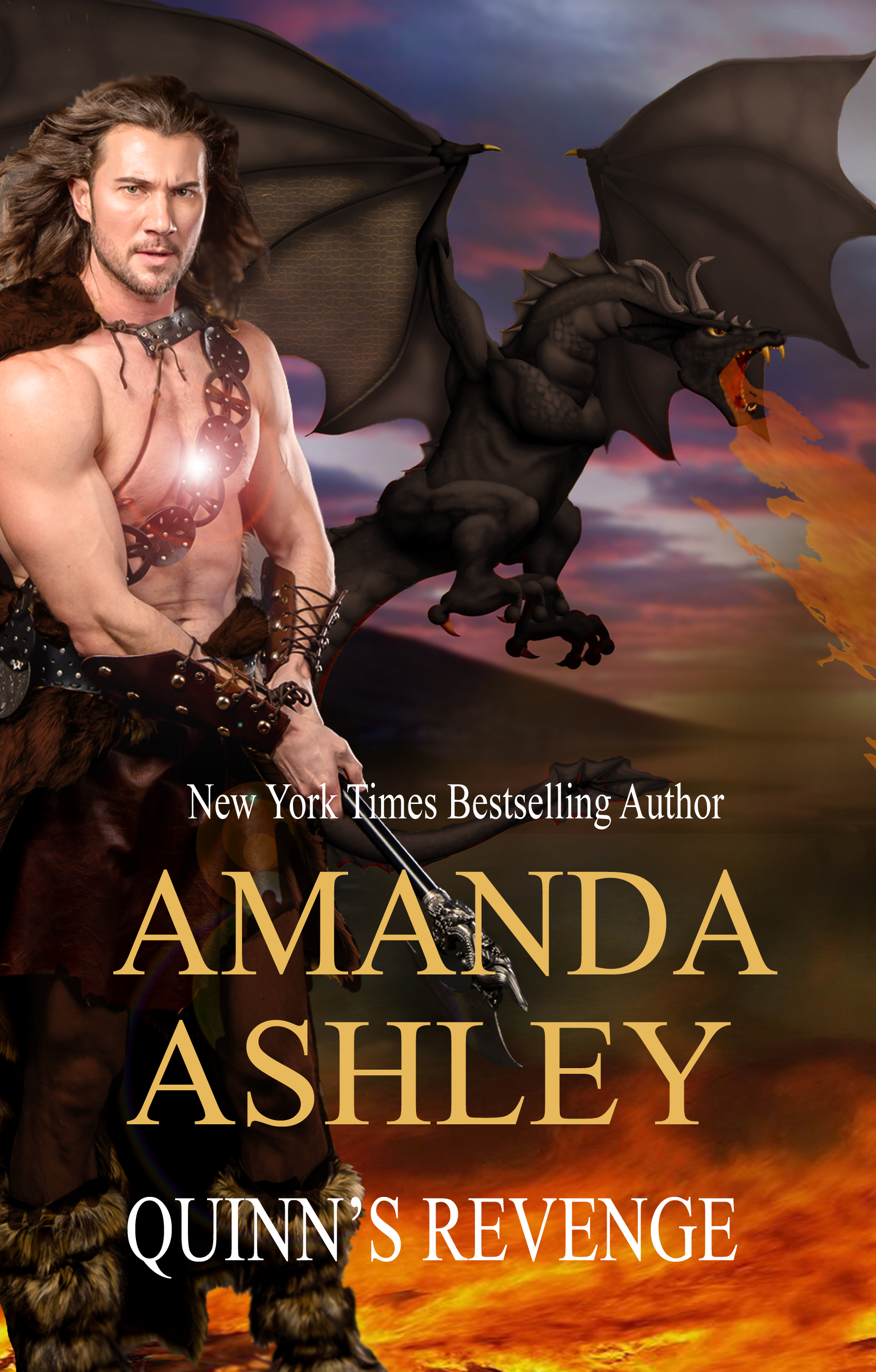 With the death of the evil witch, Serepta, Quinn and Seleena were ready to settle down and raise their son. Until a new evil reared its head.

Wyrick, a formidable wizard, is stealing children born with magical powers in order to strengthen his coven. Queen Marri's niece is the first child to go missing. Quinn's son, Steffon, is the second.

Will Wyrick succeed in his despicable plan? Or will he come face to face with Quinn's Revenge?

Annis paced the floor of the windowless room. She had no idea where she was or how long Rajj intended to keep her there. All she remembered was falling asleep after the baby was born and waking up in this small chamber that was not a cell but definitely a prison.

Thus far, she has been well taken care of. The room, painted a pale green, was furnished with a comfortable bed, a small wooden table, and a rocking chair. A thick sage-green carpet covered the floor. She had books to read and movies to watch. But, save for the witch known as Lanna who brought in meals three times a day, Annis never saw another soul.

She had begged Lanna to tell her why she was being kept in this place, but to no avail. Gradually, Annis came to believe that Rajj had bespelled her into loving him, that he had never cared for her at all, that their marriage had been nothing but a sham. All he had ever wanted from her was a child.

In the beginning, she refused to believe that everything that had happened since she met Rajj had been a lie.

He had told her it didn't matter that she had no magic.

He had assured her that he had never been with another woman, that they would learn the intimacies between a husband and wife together.

He had vowed that he loved her.

And that had been the biggest lie of all.

How could she have been so blind to the evil that resided within? So gullible to his promises and lies?

She sank down on the bed, her arms aching to hold her daughter. Annis knew Corrie was nearby. Lanna brought her in every few hours so Annis could nurse her, but the witch refused to leave the baby any longer than necessary. Daily, Annis pleaded with Lanna to let her care for Corrie. Babies needed a mother's love and attention, but the witch only shook her head.

Annis' heart skipped a beat when she heard the rasp of the key turning in the lock. A moment later, she held Corrie in her arms. She rocked gently as the baby nursed, her eyes drinking in the sight of her daughter, her fingers lightly stroking the fine gold of Corrie's hair, her downy cheeks.

She lived for these few precious moments, knowing, deep in her heart, that when the child was weaned, Rajj and the coven would have no further need for her.

It happened so gradually that, by the time Quinn became aware of it, months had passed and then one morning, as the twin suns rose in the sky, he realized he was no longer subject to the Dark Sleep of his kind. The hunger for blood remained, but the Dark Sleep no longer had any power over him.

At first, he suspected Seleena had conjured a new spell to allow him to spend more time with their son, a charm similar to the one that allowed him to eat mortal food, but when questioned, she had assured him she had nothing to do with it, leaving him to believe it was the black dragon tattoo's doing.

Standing in front of the large, oval mirror in the bedroom, Quinn studied the tattoo on his left shoulder. It had grown larger in the last few months. Once the body had covered only the top of his shoulder, with the forked tail twining around his bicep. Now, the body covered not only his shoulder, but his upper arm and a portion of his back, as well. The tail trailed past his elbow all the way down to his wrist.

He turned away from the mirror when Seleena stepped into the room. "Is something wrong?" she asked. "Breakfast has been ready for twenty minutes."

He ran his hand over the dragon's head, heard the creature's faint growl of pleasure. "It's growing. What do you think it means?"

Her gaze moved to the tattoo, a constant reminder of a past she would rather forget, but now a part of the man she loved more than life itself. "I have no idea."

He heard the note of worry in her voice. The tattoo had been conjured by Seleena's daughter, who had been a powerful witch in her own right. Serepta had infused the tattoo with a part of her dark magic, intending to use it to increase her magical powers. Instead, it had been her undoing. Neither Quinn nor Seleena had spoken of Serepta since the dragon incinerated her, but he knew Seleena wondered, as did he, if all of Serepta's dark magic had died with her.

"It seems odd, that she would saddle me with the thing and then lock me stone, don't you think?"

Seleena nodded. "I never thought about it, but now that you mention it, it does seem peculiar. But then, she often did rash things on impulse. And I'm sure..." She took a deep breath. "I'm sure she expected to be able to retrieve the dragon's power at some time in the future."

A future Serepta never had. Guilt knifed through Quinn. The dragon had incinerated the witch, but Quinn felt responsible, since the dragon had acted to save his life.

Seleena moved into Quinn's arms. Rising on her tiptoes, she kissed him. "Worrying doesn't help. Neither does dredging up the past."

His arm tightened around her waist. Although they had been together over a year, he still couldn't believe she was his. Or that the child born of their love slept in the next room. Now three months old, Steffon appeared to be a normal, happy baby and yet Quinn couldn't help wondering if some hint of darkness lurked in his son, born of the mating of a witch -- even a white witch -- and a vampire. He had voiced his concern when Seleena first told him she was pregnant. She had assured him their son would be healthy and normal and yet, in spite of her repeated assurances, doubts lingered in the back of his mind.

Seleena tugged on his hand. "Come on. Your breakfast is cold."

He let her lead him into the kitchen, sat at the table while she reheated their meal.

With Serepta's death, life had settled into a comfortable routine. Seleena continued to use her magic to help the villagers - healing their sick, blessing their cattle and crops, listening to their problems. She was a remarkable woman, beautiful, patient, kind, always busy with their son, eager to be of help to others, whether they were Queen or peasant.

Quinn knew he should have been content, but the truth was, except for the hours he spent with his son, he had little to occupy his time. Though he hated to admit it, he was rapidly growing bored with life in the village. He needed to be busy. Needed to feel he was contributing to the household. A man needed a job, a sense of purpose. Sadly, he had little qualifications for employment. There wasn't much call for assassins these days, and that was the only thing he was good at. Occasionally, he went deer hunting, but with only himself and Seleena to feed, a haunch of venison lasted a good long time.

"You look troubled," Seleena remarked. "Is it the tattoo?"

She put breakfast on the table, then took the chair across from his. "What does that mean?"

"I'm feeling restless. There's nothing for me to do here, you know? Don't get me wrong. I love being with you and Steffon. But I need a job. Something to keep me busy."

Seleena nodded. Hadn't she secretly feared this very thing might happen? Her village was small, with little excitement. The men raised crops and cattle, the women sold produce in the marketplace. Unlike the big cities of Fenton, Bosquetown and Tarnn, life here was quiet and uneventful.

Keeping her voice steady, she said, "I've known for some time that you're not happy here."

"I'm not unhappy." Reaching across the table, he took her hand in his and kissed her palm. "Don't think that, Red. Don't ever think that."

Worry shadowed her eyes. "Do you want to leave?"

Her relief was a palpable thing. "Where would we go?"

"I don't know. I haven't really given it any thought." He leaned back in his chair, arms crossed. "You wouldn't be happy anywhere else, would you?" How could he even think of asking her to leave? She was a part of this place, as much as the trees and the grass.

"This is my home. I'm accepted here. Most other towns don't trust witches, or want them around. And big cities…" She shook her head. "I'm not comfortable there."

"I don't reckon vampires are welcome anywhere." He snorted softly. "We make a hell of a pair, don't we?"

Pushing away from the table, Quinn pulled her into his arms. "Unless you send me away, I'm not going anywhere," he said, his voice a growl.

And then he kissed her, long and slow and deep. She melted against him, her flowery scent familiar and enticing, her breasts warm against his bare chest. She looked up at him, her dove-gray eyes shining with love and desire.

Murmuring her name, he swept her into his arms and carried her to bed.

At a word from her lips, their clothing fell away. Her gaze moved over him, filled with longing and admiration as her hands slid across his chest and down his arms, reveling in the strength she felt there. Her fingers delved into the thick dark hair at his nape, then skated down his back, her nails lightly raking his skin. He groaned softly as she writhed beneath him, hips lifting to receive him.

Their coming together was as explosive as the colliding of two stars - full of sparks and fury.

Quinn whispered her name as she let out a sigh of deep contentment. She was the best part of him, the other half of his soul. The anchor that kept him grounded, kept his infernal hunger at bay.

If he died of boredom in this little backwater town without a name, so be it.

But he was never leaving her side.