Sandy pulled back hard on the reins to keep the horses from trampling whatever, or whoever, was lying across the trail.

Ordinarily, she would have been watching the road more closely on a cloudy night like this, but she was still reeling from the sight of a comet or some other heavenly body that had gone streaking across the night sky in front of her only a few moments earlier.

And now this.  She hoped it wasn't a deer, or worse, one of her heifers.

Looping the reins around the brake, she climbed down from the wagon and walked toward the still figure, which was clearly illuminated in the glow of a bright harvest moon.

Heidi jumped out of the back of the wagon and followed her, growling softly.

Sandy pressed a hand to her heart as she drew closer. It wasn't a calf, or a deer.  It was a man.  A man who was very nearly naked.

"Oh, please," she whispered, one hand at her throat.  "Please don't be dead".

The words repeated themselves in her mind as she knelt beside him and gently rolled him onto his back.

Her first thought was that he was the most beautiful man she had ever seen. Not beautiful in the feminine sense of the word, for he was totally, blatantly male from the top of his head to the soles of his bare feet, but beautiful nonetheless. Her gaze skimmed over him - long black hair, thick sooty-colored lashes, an aristocratic nose, perfectly shaped, sensual lips, broad shoulders, a chest lightly furred with curly black hair, a washboard stomach, long muscular arms and legs.  Sheer, masculine perfection, she thought again, all wrapped up in a nice healthy tan.

She frowned at the odd-looking cloth that covered his loins.  It was dark green and for some peculiar reason, it reminded her of a fig leaf. 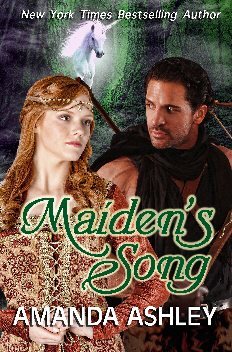 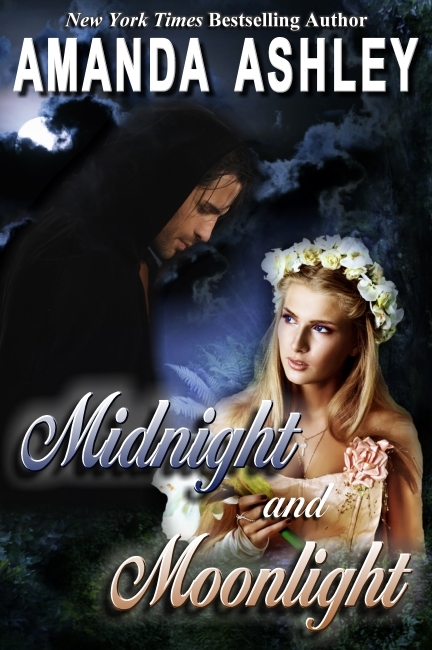 Before Roslyn could fathom what it meant, panicked shouts and incoherent pleas for mercy filled the air, followed by an ominous silence. The scent of blood floated on the night wind, accompanied by a curious sound, like a cat licking thick cream.

She lay still, afraid to breathe, afraid to move for fear of drawing attention to herself. If she kept quiet, perhaps whoever or whatever had killed her attackers - for she had no doubt they were all dead – would think her dead, as well.

She squeezed her eyes tight shut when someone – or something – pulled her skirt away from her face.

The voice, as deep as a well, moved over her like velvet. Surely no one with a voice like that would do her harm.

Opening her eyes, Roslyn blinked at the dark shape looming over her. She glanced right and left, expecting to see the bodies of the three men who had attacked her, but there was no sign of them.

The stranger offered her his hand. "Come, lass, you're cold."

As if she had no mind of her own, Roslyn placed her hand in his large one and let him pull her to her feet. He towered over her.

"Are you hurt?" he asked again.

Holding her torn bodice together with one hand, she shook her head, unable to tear her gaze away from his face. She could see little in the moon's light, only that his hair and eyes were as dark as midnight.  "Who are you?"

"You saved my life. I should like to know your name."

He made a dismissive gesture with his hand. "It was no trouble. They'll not bother you again. Come along."

Before she could protest, he swung her into his arms and carried her swiftly out of the cemetery and up a narrow path that wound around Red Stone Mountain until, in less time than she would have thought possible, they were at the top.

The outside of the manor resembled a Scottish castle, complete with turrets. When they reached the iron-strapped door, it swung open, seemingly of its own accord. Her rescuer carried her across the threshold, then placed her on her feet. The door closed quietly behind them.

Shandra shook her head vigorously. "There must be another way." She toyed with a lock of her hair. "There must be someone else we can turn to for help." A quick smile softened the worry lines on her brow. "What of Mougadour?" she murmured. "Let us summon Mougadour."

The two young women exchanged wistful glances as they contemplated Mougadour, the most valiant, handsome knight in all the seven sacred cities of Karanda.

"He is so tall," Neone murmured, a dreamy look in her dove-gray eyes.

"And so brave," Shandra added.

"And so unavailable," Jezriah reminded them curtly. "Have you forgotten he has gone to Asgoro to hunt mountain sheep?"

"Aye, I had forgotten," Shandra admitted.

"You are forgetting something else, as well," Jezriah muttered. "No ordinary man can lay hands on a unicorn."

"Mougadour is no ordinary man," Shandra murmured with a sigh. 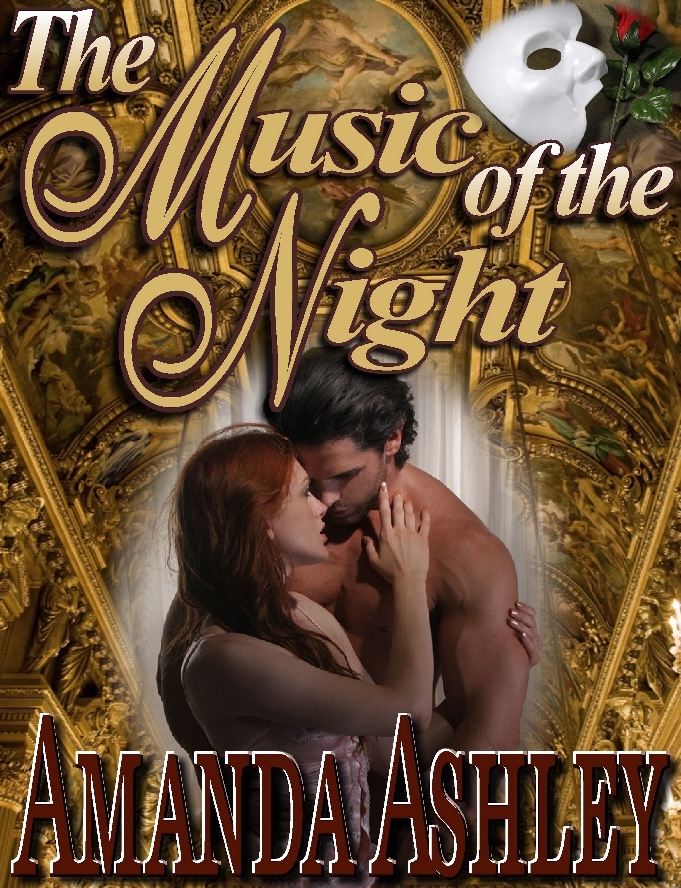 2010 The cover for The Music of the Night, created by Laura Shinn, is voted Best Book Cover in the Preditors and Editor Poll

Excerpt from the book:

And then, abruptly, he was looming over her. The half-mask gleamed a ghostly white in the darkness.

"Christine?" His voice, filled with hope, tugged at her heart.

She shook her head, her gaze fixed on the mask that covered the right side of his face.  No, it couldn't be. He wasn't real. He didn't exist.

He took a step closer, and then he frowned.  "Forgive me, you are not she."

Cristie tried to speak, but fear trapped the words in her throat.

"You are very like her," he remarked, a note of wonder in his voice.

His voice was mesmerizing, a deep, rich baritone laced with pain and sorrow and a soul-deep loneliness.

Caught in the web of his gaze, she could only stare up at him, her heart pounding a staccato beat as he reached toward her, his knuckles sliding lightly over her cheek.

A slight nod, filled with arrogance.  One dark brow arched in wry amusement.  "Some people know me as the Phantom of the Opera."

Jason Blackthorne is the stuff of nightmare…and fantasies. He is a vampire, doomed to an eternity of darkness and feeding on human blood to survive, until he meets Leanne, the sunshine to his darkness. She is a singer/dancer, to whom Jason finds himself inexplicably drawn. From the moment Leanne meets him, she is convinced he is the man she has waited for her whole life. But Jason is terrified to reveal his secret; convinced Leanne would be repulsed by the truth. Will they overcome the curse binding him to a lonely darkness forever, to be
together?

He was a very old vampire, weary of living, weary of coming alive only in the darkness of the night.

For three hundred years he had wandered the unending road of his life alone, his existence maintained at the expense of unwary mortals, until the advent of blood banks made it possible to satisfy his unholy hunger without preying on the lives of the innocent and unsuspecting.

And yet there were times, as now, when the need to savor blood taken from a living, breathing soul was overwhelming. To feel his fangs sink into human flesh, to feel the warm rush of fresh blood flowing over his tongue. It was a high like no other; a craving he fought against, but didn't always win.

Tonight, he stood in the dim shadows outside the Ahmanson, watching groups of happy, well-dressed people exit the theater.  He listened to snatches of their conversation as they discussed the play.  He had seen the show numerous times; perhaps, he thought wryly, because he could so easily sympathize with the plight of the Phantom of the Opera.  Like Sir Andrew Lloyd Webber's tragic hero, he, too, was forced to live in the shadows, cursed to shun the light and warmth of the sun, unable to reveal his true identity.

And so he lurked on the outskirts of mortality, breathing in the fragrance of the warm-blooded creatures who passed him by.  They hurried along, laughing and talking, blissfully unaware that a monster was watching.  It took no effort at all to drink in the myriad smells of their humanity – a blend of perfume and sweat, shampoo and toothpaste, face powder and deodorant.  He sensed their happiness, their sorrows, their deepest fears.

He waited until the crowds had thinned, and then he began to follow one of the numerous street beggars who had been hustling the theater patrons for money and cigarettes.  There were hundreds of homeless men roaming the dark streets of the City of Angels.  On any given night, you could find a dozen or more panhandlers lingering outside the Ahmanson, hoping to score a few dollars that would enable them to buy a bottle of cheap booze and a few hours of forgetfulness. If only he could drown his own past in a pint of whiskey.

Silent as a shadow, he ghosted up behind his prey. 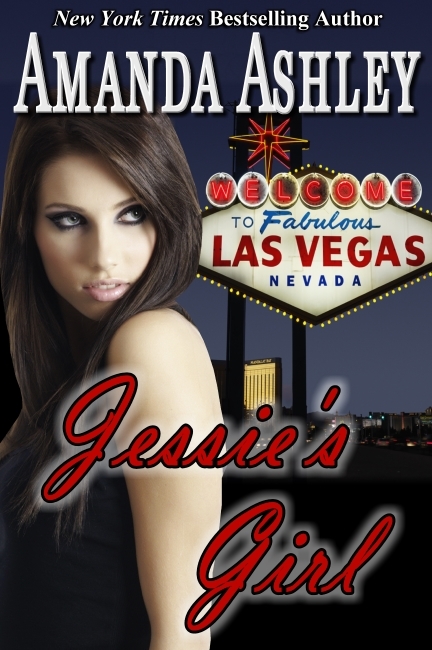 A once in a lifetime trip to Graceland and then on to Vegas is a dream come true for Kathy Browne. She stumbles upon a remarkable Elvis impersonator and is drawn to his show night after night. Then a miracle happens and he notices her, approaches her, and asks her out. Amazingly she wins a jackpot allowing her to extend her stay; but something isn't quite right. Is Jessie too good to be true?

He called himself Jessie Garon Presley, and he was the most amazing Elvis look-a-like Kathy had ever seen.  He had the same intense blue eyes, the same pouty lower lip, and he wore his thick black hair in the style Elvis had made famous back in the Fifties - sideburns and a ducktail.  But instead of wearing the flashy, sequined jumpsuits Elvis had favored in his later years, Jessie wore a pair of slick black pants and a black silk shirt, open at the throat.  A thick gold chain circled his neck.  A gold ring with a diamond the size of a golf-ball winked on the middle finger of his right hand.