IN PRINT AND eBOOK

When I wrote Everlasting Kiss way  back in January of 2010, I fell in love with Rhys Costain, who wasn't even the hero of the book.

I loved him so much, I wrote Everlasting Desire, so he could have a story of his own.

Years passed. I wrote several other books and then, when I was looking for an idea for a new book, I remembered Rhys, who was, and still is, one of my favoritie characters. And so I wrote Everlasting Embrace  just so i could visit him again. 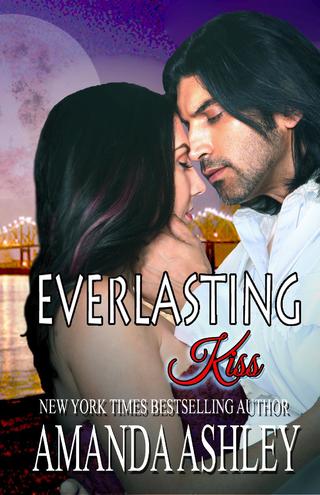 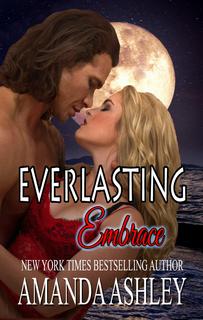 Love comes in many guises. Rylee Wagner had no idea that a chance meeting with a stranger on the beach would turn her whole world upside down. Her heart went out to him when she learned that he was mourning the deaths of his wife and unborn child. Still, there was no denying the attraction between them.

Alex O'Donnell was immediately attracted to Rylee. She was young and beautiful and compassionate, a balm to his wounded soul. But there were things he couldn't share with her. Like the fact that he was a vampire hunter, or that a vindictive vampire had killed his wife and child.

Alex knew he should stop seeing Rylee. Every minute he spent with her put her life in danger. But once he'd held her in his arms, he wanted it to be an everlasting embrace.

Alex O'Donnell stared at the headstone, his lips moving silently as he read the words carved in the granite ~

Taken from us too soon

"Too soon," he murmured.

Unbidden, came the memory of the night only a few short weeks ago when he had come home and found her dead. Guilt ate at his soul. Had he been at home where he belonged, she would be alive today. But no, he had been determined to go out and make one last kill.

And it had cost him everything.

He remembered that night as if it had happened yesterday. Coming home, entering the kitchen through the garage door, knowing immediately that something was wrong.

He had stood there for several moments, letting his eyes adjust to the darkness while he listened for any sound that would indicate the intruder was still in the house.

It hit him when he left the kitchen and stepped into the living room.

The scent of blood.

Adrenaline pumping, heart pounding, he had rushed down the hall toward the master bedroom and switched on the light.

Paula lay on the bed, her eyes wide and staring, a gaping hole in her throat. Splashes of bright red blood stained the sheets, the pillow case beneath her head, the bodice of her nightgown, the bedroom walls.

Turning away, he had dropped to his knees and emptied the contents of his stomach on the floor. He had seen death before. Hell, he had caused a lot of it, although he wasn't sure you could technically kill a vampire, since they were already dead. He had seen his brother, Brandon's, body after a female blood-sucker killed him. But this…

He had closed his eyes and retched again.

When he could manage it, he regained his feet and covered her body with the bedspread.

It wasn't until he turned away from the bed that he saw the message scrawled in blood on the wall.

You killed my mate

I have killed yours
Rot in hell

He had stared at the words, his mind reeling. How had the vampire's lover found him? He had taken all the necessary precautions to ensure that he couldn't be traced. There was no license plate on his car to identify him. His home phone number was unlisted. His mailing address was a P.O. Box. He had sprayed himself with Scent-B-Gone. He swore a vile oath. The bottle had been nearly empty. He should have gone home for more, but he had been so gung-ho to take one last head, he had used what little he'd had on hand and hoped it would be enough.

And Paula and his unborn child had paid the price for his impatience. He glanced at the blood-stained bed. This was the reason hunters rarely married. Family members were easy targets for revenge. He had promised Paula he would give up hunting vampires. If he had kept that promise, his wife would still be alive and his child with her…

Alex blinked back his tears, reaffirming the vow of vengeance he had made the night she died.

"They won't get away with this," he said hoarsely. "By your life's blood, I swear I'll find whoever did this and make them pay." And then, as guilt and regret knifed through him, he whispered, "Forgive me, Paula."

The funeral had been surreal, the days that followed a nightmare from which he couldn't awake. The police had come by the house with follow-up questions. He received numerous sympathy cards from their friends that only served to emphasize his loss.  He had wondered through the empty house  like a lost soul.

And maybe that's what he was.

What he always would be.