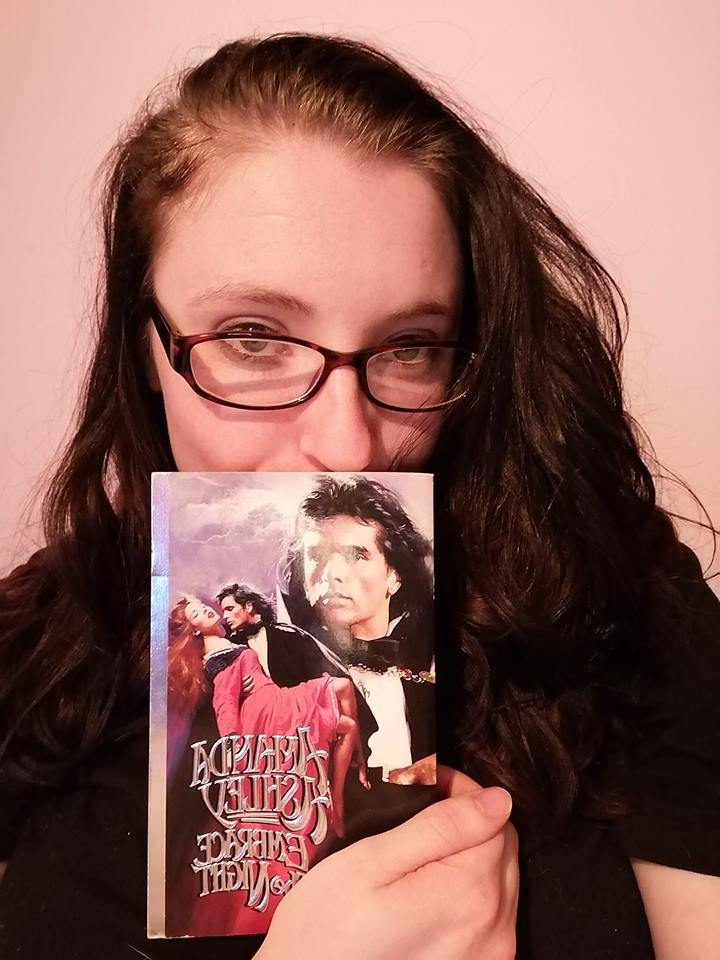 This lady is a real fan of this book!!!! She said: In honor of World Book Day, a special shout out to the Amazing author of my most cherished book. I've read it over 75+ times (no joke) and am rereading it now. This book has been with me over half my life and brought me through a lot of hard times. It's amazing how much a book can mean. Thanks Amanda Ashley!!!!

Embrace the Night was my first, full-length vampire romance. Once I finished it, I was hooked. I've been writing, and loving, vampires ever since. 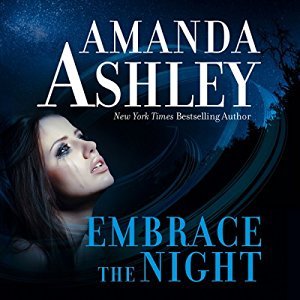 Sensuous! Mesmerizing! Electrifying! Ms. Baker's Amanda Ashley pseudonym makes a dazzling debut with a new vampire novel in the tradition of Maggie Shayne and Nancy Gideon. EMBRACE THE NIGHT is a heart-wrenching tale of a tortured hero who loves deeply and the one woman who is not afraid of the beast but adores the man within. This is a "must read" for all vampire romance fans.

AFFAIRE DE COEUR said, EMBRACE THE NIGHT is a fast-paced, delicious vampire romance filled with two fantastic lead protagonists. Amanda Ashley, who, as Madeline Baker, is noted for her thrilling western romances, successfully changes genres and shows that her work remains top rate in anything she does.

ONE OF MY READERS SAID:
Embrace the Night was one of the first of many vampires romances that I have read. It is chock full of romance, intriguing characters, passion,reincarnation, and undying love. Gabriel is a character that all women dream about. This brilliantly mastered novel has captured my heart forever." 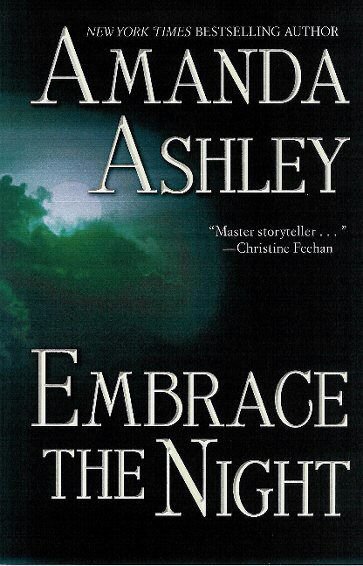 Heart to Heart said:
Madeline Baker, author of some of Leisure Books' most popular romances, makes her LoveSpell debut (and introduces her new pseudonym Amanda Ashley) in Embrace the Night. This haunting novel tells a story of undying passion. Sara Jayne Duncan called the handsome stranger who watched over her Gabriel, and named him her guardian angel. In truth, he was a creature of darkness, a vampire, irresistibly drawn to her light and beauty, and determined to protect her from the curse of his Dark Gift.

But, when she was in deadly danger, a few drops of his blood gave her everything she had dreamed of, transformed the lovely crippled child with nothing to live for into a ballerina without equal. To save her life, he stole her innocence. Man or monster, she was destined to love him with all her heart. 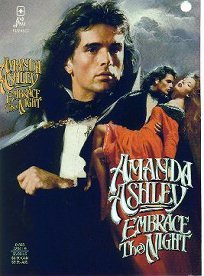 Master of Darkness
A creature doomed to wander the earth in eternal darkness, he searched the ages for someone to share the endless night of his existence, for that one woman who would recognize the man within the monster.

Mistress of Light
An angel of purity and sunlight, she feared the mysterious stranger whose eyes promised endless ecstasy even as he whispered dark secrets she dared not believe.

They were two people longing for fulfillment, braving the danger of a love like no other. Alone, they faced desolation and despair; together, they would share undying passion, defy eternity, and EMBRACE THE NIGHT.

Author Annee Cartier said, Enchanting, ethereal, unbelievable! Composed like a beautiful ballet, and just as unforgettable! Gabriel is as sexy as Phantom, as poignant as Heathcliff, and as irresistable as the Highlander; Sara is a heroine well worthy of him. You'll fall in love with these two and never want to let go.

He had been observing Sara Jayne for the last thirteen years, watching, from the shadows, as the cumbersome braces on her slender legs were changed again and again. A weakness in the lower limbs, the doctors said. That was what kept her from walking.

He had seen the hope fade from her wide blue eyes as she accepted the fact that she would never run and play like the other girls who lived in the orphanage. Later, as she grew older, he had felt her despair as she realized that she would probably never marry or have children, that she would likely live out her days alone, with no family to mourn her, or remember her.

He was the only one who sensed the true depths of her despair, her heartache, the only one who knew how she yearned to run in the golden light of the sun, to walk in the silver shadow of the moon.

He was the one who heard the sound of her muffled tears in the dark of the night. For others, she put on a brave face, but alone in her room, she wept bitter tears - tears that ate at his soul like acid.

He had never intended for her to know of his existence. Never. He had wanted only to watch over her, an unseen phantom who shared her loneliness and in so doing, eased his own.

So it was that he was lingering in the shadows outside her room late one summer night.

He knew she had spent the afternoon sitting in the park across from the orphanage, watching the younger children at play, watching the couples old and young stroll hand in hand along the tree-lined path.

Watching life pass her by.

She had skipped dinner and gone to bed early that evening, only to lay awake long after everyone else in the house was asleep. A single candle burned at her bedside, its flickering light casting pale shadows over her face.

Because of the difficulty of getting her wheelchair up and down the stairs, Sara's bedroom was located on the first floor. When she'd been younger, a nun had shared her room, but now, because she was the eldest girl in the orphanage, Sara was allowed the privacy of a room of her own.

Now, hovering in the shadows on the veranda, he felt his heart ache. She was talking to herself, her voice low and soft, but not so low he could not hear it.

"You can do it, Sara Jayne," she said, her voice tinged with determination. "I know you can. The doctors could be wrong!"

"You can do it." Taking a deep breath, she clutched the newel post at the head of the bed and pulled herself to her feet.

For a brief moment, she stood there, her brow sheened with perspiration and then, bravely, she let go of the post.

He bit off a curse as her legs gave way and she dropped to the floor.

"It's hopeless," she murmured, her voice thick with despair. "No one's ever going to adopt me." She dashed the tears from her eyes. "Or love me. I'll spend the rest of my life in this place and never do any of the things other girls do. I'll never marry. Or have children..."

She sat there for several minutes, staring at the floor, her shoulders slumped in resignation.

It grieved him to see her steeped in such anguish. She had always tried so hard to be cheerful, to be brave. She was a beautiful young girl, on the verge of womanhood. Who could blame her for feeling that life was passing her by?

He longed to go to her, to take her in his arms and give her the comfort, the reassurance, she so desperately needed, but he dared not reveal himself.

He was about to turn away when she reached under her pillow and withdrew a small brown bottle. She stared at the bottle for a long moment, a pensive expression on her face.

And he knew, in that moment, that she was thinking of ending her life.

Without thinking of the consequences, he barged into the room.

Sara Jayne glanced up, startled, as a tall man swept into her bed chamber. He was dressed all in black, from his soft leather boots to the heavy woolen cloak that swirled around him like a dark cloud.

Sara clutched the bottle to her breast. "Don't what?"

She blinked up at him, too surprised by his unexpected intrusion in her room, and by his knowledge of what she intended to do, to be alarmed. "Who are you?"

"No one of importance."

"What were you doing out on the veranda?"

That frightened her. He saw it in the way she shrank back against the pillows, in the sudden widening of her eyes as she realized that she was alone, and helpless.

"I have watched over you since you were an infant."

She smiled then, a faint expression of amusement and skepticism. "Who are you, my guardian angel?"

"And is your name Gabriel?"

He ignored the sarcasm in her voice. "If you wish."

She glanced at the bottle in her hand. "And have you come to take me to heaven?"

He shook his head. His sweet Sara would never see hell, he mused, unless she looked into the depths of his eyes.

On silent feet, he closed the distance between them, and took the bottle from her hand.

Too late, she tried to snatch it back.

"No, Sara," he said, shoving the bottle into the pocket of his trousers. "I'll not let you take your own life. Not now. Not ever."

"I have no life," she retorted

bitterly. "I've never been anything but a burden, first to my family, and now to the Sisters who must take care of me."

"It is! Don't you think I know it is? Why else would my mother have abandoned me?"

"Sara." He whispered her name, stricken by the depths of the pain in her eyes.

"I'm nothing but a burden," she said again. "The sisters say they love me, but I know they'd be relieved if I was gone."

"Ah, my poor sweet Sara," he murmured, and before he quite realized what he was doing, he was sitting on the edge of the bed, drawing her into his arms.

How lovely she was, with her silky blond hair and eyes as blue as a robin's egg. Sweet Sara Jayne. So lovely. So fragile.

He held her close, surprised that she didn't pull away. Instead, she burrowed into his arms, her face pressed to his chest. He felt her shoulders shake, felt her tears soaking through his shirt, the moisture warm and damp upon the coolness of his skin.

He held her, rocking her gently, until she fell asleep. And even then he was reluctant to let her go.

He cradled her to his chest until the first faint hint of dawn brightened the sky. Only then did he lower her to the bed. He gazed down at her for a long moment, and then he drew the quilt over her.

Knowing he had no right, he bent down and kissed her cheek, and then he was gone, as silent as the sunrise.