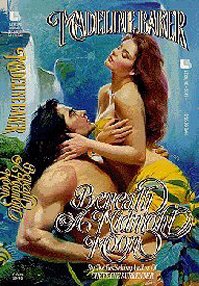 Original Cover
Beneath a Midnight Moon was originally published by Leisure Books under the name Madeline Baker. When Leisure went out of business, Zebra bought it and published it as an eBook only under the name Amanda Ashley, in case you were wondering. 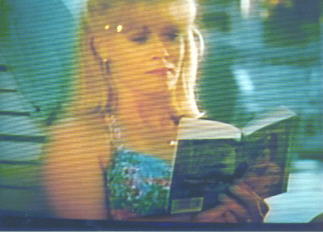 If you ever watched the tv series, Renegade, you might remember this scene...if you look close, you'll see that she's reading BENEATH A MIDNIGHT MOON. The photo is kind of blurry because I snapped the photo off the tv.

BENEATH A MIDNIGHT MOON 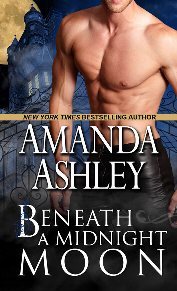 The new back cover copy reads:

Descended from ancient shapeshifters, Hardane could take on wolf form to stalk the darkness. But as a man he had long, sinfully black hair and a body to entice any woman.

He appeared to Kylene in her dreams, then rescued her from certain death at the executioner's hand. He was promised to another, his marriage destined to end the brutal warfare between their two peoples. But no matter what the danger, no matter who tried to stop them, he would spirit her into the night and tempt her with a love like no other …

He came to her in dreams, always different, yet always the same, his fathomless gray eyes filled with quiet desperation and a silent plea for help.

Was he real, this dark-skinned man with the long inky black hair, or only a dark image sketched from the paint box of her imagination, a phantom warrior woven into the shadowed tapestry of her nighttime fantasies...

She was walking through a deep green forest dappled by shimmering fingers of sunlight. The air was warm, fragrant with the aroma of a thousand exotic ferns and flowers. She heard the joyful songs of birds praising the birth of a new day, the distant whisper of a waterfall thumping over stones.

Deeper and deeper she penetrated into the heart of the emerald forest, her footsteps muffled by a thick carpet of pine needles as she explored this strange new world that was so different from her own.

She saw a black-faced doe picking its graceful way along a narrow path, saw a pair of red-tailed squirrels chasing each other across the forest floor, saw a bird with bright yellow plumage flitting lightly from tree to tree.

And then she saw him, the man who lived only in her dreams. Her gaze moved over him will undisguised admiration. He was large of stature, his massive shoulders and well-muscled arms and legs accentuated by the gauzy white shirt and tight buff-colored breeches that he wore.

His eyes were gray, the color of clouds on a winter day. His hair fell to his waist, as deep and black as the Caves of Mouldour. His skin was the color of dark honey, smooth and unblemished. His nose was long and straight; his cheekbones prominent and well defined; his jaw strong and square.

His lips were firm, sensual, and when he smiled, as he was smiling now, it made her wish that he was a man of flesh and blood and not just an image conjured from the fathomless depths of sleep.

He came toward her, one hand out in a gesture of welcome, but still, in his eyes, she saw the same silent plea for help. And yet, how could she help him when she couldn't help herself?

She stood in the middle of the inquisition chamber, her wrists tightly lashed to a thick iron bar suspended above her head.

Kylene shook her head. She'd been imprisoned for almost a fortnight, and she still had no idea why they thought she could help them find the elusive Hardane.

"The lash is a crude weapon," the Interrogator mused. "Crude, but effective."

He nodded in the Executioner's direction and Kylene's body tensed as she waited for the lash to fall. The thick leather strap cracked through the air with the sound of thunder, biting deep into her skin, sizzling like summer lightning.

"Dying under the lash is a most unpleasant way to perish," the Interrogator remarked. "A way that, if done with care, can take a very long time."

It was an effort to hold her head up, to stay the words of pleading that rose in her throat. It was fortunate she didn't know where Hardane was, she thought, for she feared she would tell the Interrogator everything he wished to know if it would spare her the pain of the lash. But she could tell him nothing.

The whip fell again, and then again. Tears stung her eyes and clogged her throat. The blood trickling down her back felt like sunfire. A red haze hovered before her face, making everything else seem distant and out of focus. Trembling convulsively, Kylene closed her eyes, and he was there, standing before her, his slate gray eyes warm with compassion. His hand reached out to her, the touch of his fingertips as soft as fairy mist as he gently wiped away her tears.

Startled by the sound of his voice, so near, so real, she opened her eyes.

And he was gone.

Mad, she thought. I must be going mad. And yet his voice seemed to linger in the room, surrounding her with its strength, cocooning her in its warmth, lessening her fears, easing her pain.

The Interrogator's voice cut through the silence, sharp as a blade.

The Interrogator nodded and the whip fell again.

She heard the sibilant hiss, felt it strike across her shoulders. From deep within her mind, she heard a low-pitched wail, like that of a man sobbing with fury.

As if from far away, she heard the Interrogator order the Executioner to put away the lash.

Sick with relief, she closed her eyes and surrendered to the darkness that dragged her down into blessed oblivion.

It was dark and she was alone beside an iridescent waterfall. Moonlight danced upon the face of the ink-black water. Countless shooting stars chased each other across the indigo sky. A night bird lifted its voice to the heavens, its three-note mating call begging for attention.

Sitting alone on a flat gray rock, she searched the darkness, a nameless fear making her shiver with apprehension.

There was a soft rustling in the underbrush as a huge black wolf materialized out of the shadows, its dark gray eyes fixed upon her face.

The wolf drew closer, close enough to touch. A low whine erupted from its throat, and then it lowered its head and licked the palm of her hand. The velvet stroke of its tongue coursed through her, hot as molten lava, sweet as sunbaked honey.

A soft sigh of pleasure escaped her lips. And then, to her disbelief, the wolf changed shape, its image blurring, until a man stood before her. A man with hair the color of pitch and eyes the color of storm-tossed clouds.

"You." The word whispered past her lips.

"Search your heart, lady. You know who I am."

She wanted to plead with him, to tell him that it had to be now, this very night, because it was to be her last night. But the words seemed trapped in her throat.

And then he was touching her, his big, callused palm cupping her cheek, his dark gaze lingering on her face, as warm and sweet as a caress.

She heard the promise in his words, the underlying anguish in his voice.

He gazed deeply into her eyes, her soul. "Only swear you won't betray me."

"I swear," she murmured.

His smile pierced the dark clouds of her despair, and then he was gone, leaving her alone once more, left to wonder how she could possibly betray him when she didn't even know his name . . . when she was doomed to die by the Executioner's hand.