Prepare yourself to enter Amanda Ashley's world of vampires, where sexy predators rule the night, and things are not always as they appear. I've heard fans describe Amanda Ashley's paranormal novels as the only vampire books they'll read. And while I love good books that feature vampires, I had never picked up one of hers until now. Now I'm kicking myself for letting this author go for so many years.

Fans have been begging for Edward Ramsey's story, and they definitely will not be disappointed. In AFTER SUNDOWN, characters from SHADES OF GRAY make standing ovation appearances. While I'm usually a stickler for reading a series in order, I had no trouble getting through this one as a stand-alone. With characters so perfectly drawn, action that keeps the pages turning, and a love story that more than satisfies, AFTER SUNDOWN has all the merits of a keeper. Do yourself a favor and read AFTER SUNDOWN. You definitely won't be sorry.

Carolyn at A Romance Review said:
After Sundown is a fast paced, brutal look into the realities of the "Dark Gift". Marisa, though she loves Grigori, is still reluctant to give up her life in the sun. Kelly, on the other hand, has the guts to ask Edward to bring her over. And after a period of adjustment, revel in her new life with Edward.

This is the first book I have ever read by Ms. Ashley, and I am looking forward to finding others by her. After Sundown is the sequel to her previous novel, Shades of Grey, but can definitely be read as a stand-alone. She has done a wonderful job of seamlessly melding the details from the previous story into the present so you are not left wondering who is who and who did what.

The dark gift had been bestowed upon him . . .
Edward Ramsey was confused by his existence. Once a well-known vampire hunter, he now found himself one of the undead, that which he once hunted. On one of his nightly outings, he happened upon a young woman intent on ending her life. He made the decision to interfere with her plans and keep in her the world of the living. By doing so, how will it affect his life?

He saved her from certain death . . .

Kelly Anderson stood on the far edge of the pier, staring down into the still black water below. It looked cold enough to numb her pain. She was convinced that she had nothing to live for. As she jumped in the bottomless pool, she was unprepared to be saved by a guardian angel. When she awoke, she discovered that the man who had saved her was far from an Angel.

Amanda Ashley has created an exceptional sequel to accommodate her book SHADES OF GRAY. Edward Ramsey has all the elements that make for an irresistible read. The dark shadows that surround his existence are very appealing. I feel this is one of Ashley's most compelling novels I have read. The talent that she so effortlessly exhibits is why she is one of the most sought after authors in the business. HIGHLY RECOMMENDED.

AFTER SUNDOWN continues the story of Grigori and Marissa begun in SHADES OF GRAY. Their life together is being threatened by Khira and Marissa's own doubts about becoming like Grigori, a vampire. She has a decision to make and she wonders if her love for Grigori will be enough to make up for the things she'll leave behind.

Edward Ramsey is a compelling character forced to reconcile his
conscience and his belief system with the life he must now lead. Kelly Anderson is a fitting compliment to Edward. She has fought demons of her own and emerged a strong, competant woman willing to fight side by side with Edward.

Amanda Ashley is one of the few authors who can write romance filled with steamy sensuality without using vividly sexual descriptions. Her books are alway a pleasure to read and AFTER SUNDOWN is no exception.

Although this is the story of Edward and Kelly, Ms Ashley gives us another look into the lives of Gregori and Marissa which made AFTER SUNDOWN more enjoyable for me. It's always a pleasure to renew friendships with well-liked characters from previous books.

AFTER SUNDOWN is a thrilling story which fans of Amanda Ashley are sure to enjoy. 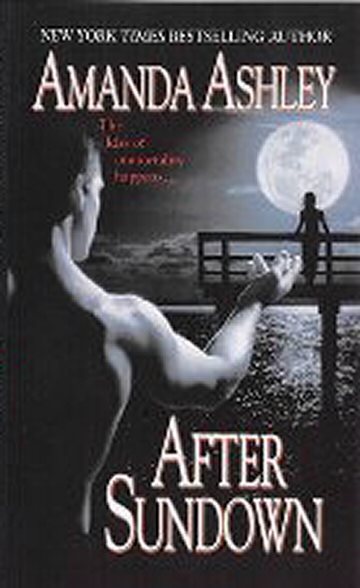 National bestselling author Amanda Ashley has created a world of seductive, preternatural creatures whose passions are as limitless-and as dangerous-as their powers. In this sensual and gripping new novel, love, desire, and ambition collide in a city that is both home and hunting ground to its
population of darkly irresistible vampires...

HE HAS BECOME WHAT HE ONCE DESTROYED

Edward Ramsey has spent his life hunting vampires. Now he is one of them. Yet Edward's human conscience-and his heart-compel him to save beautiful Kelly Anderson, and soon their growing love is his reason for living. And as the ancient, stunning, and merciless vampire Khira seeks supremacy among Los Angeles' undead, Edward and his former nemesis Grigori Chiavari, once Khira's lover, must unite to stop her-before the city, and everything they cherish, is in her power...AFTER SUNDOWN.

It was late Friday night. Steeped in black despair at the thought of what he had become, Edward Ramsey walked slowly down Hollywood Boulevard, unmindful of the moviegoers, the drunks, the panhandlers, the tourists, the endless parade of transvestites and whores.

Occasionally, he glanced at the faces of the strangers he passed by ~ homeless men and women clad in ragged clothes looking for a place to spend the night, well-dressed couples emerging from the Pantages Theater discussing the play they had just seen, young people talking about the scary movie they had just seen. Hah! They had no idea what scary really was, but he could show them. What would they think, he wondered, what would they do if they knew what he was? Would they recoil in horror and disgust, or stare at him in stunned disbelief?

Last night, the fourth since his life had turned upside down, he had considered awaiting the dawn and stepping out into the bright California sunshine to put an end to his cursed existence. As a new vampire, he would have little resistance to the pure light of day. The touch of the sun on newly made preternatural flesh, a quick burst of flame, and his life would be over, extinguished like the flame of a candle in the wind.

Vampire. How could he be a vampire? He had spent most of his life stalking the undead, destroying them. The Ramsey family had hunted the undead for centuries. Vampires were evil, abhorrent creatures, forever doomed, forever damned.

But he didn't feel evil, didn't feel damned. Only unnatural, as if he were living inside someone else's skin. His senses were heightened: touch, smell, sight, hearing, all were more sensitive, more acute, than ever before. It was amazing, how differently he perceived the world through his newborn vampire senses.

His vision was nothing short of miraculous. He could see great distances, detect minute details that ordinary mortals never saw. Each stitch in the fabric of his coat was visible to his eye. Colors were sharper, richer, almost as if they had texture and depth. Bright light hurt his eyes.

The noise of the city now seemed endless and sometimes deafening! And sometimes so overwhelming he thought he might go insane. How had Grigori Chiavari stood it for so many years? There had to be a way to shut out the constant barrage of speech and music and traffic sounds that bombarded him from every side, but if there was, Ramsey hadn't discovered it yet.

He felt physically stronger than ever before. Indeed, that sense of physical power was so intoxicating that he might have wished he had been a vampire years ago save for the awful craving for blood. The smell of it was all around him on the boulevard, a pulsing flowing river of crimson. It called to him, excited him until he thought he would go crazy. He needed to feed, but didn't know how. The hunger, the pain, had been with him every minute of the last five days, clawing at his vitals in bitter, relentless agony. He had made one clumsy attempt on a streetwalker, but had fled the scene before his goal was accomplished.

He passed a man and a woman, heard the woman gasp, her eyes widening when she saw his face. He knew in that moment that he must look like Death itself. He had seen that expression of horror before, when he had looked into the depths of Grigori Chiavari's hell black eyes and seen his own death lurking there.

Chiavari. Of course! He would go to Chiavari. The vampire had cursed him with the Dark Gift. The vampire could damn well tell him what to do with it.

There were lights burning in the big house that Grigori Chiavari had bought shortly before marrying Marisa. Hard to believe only a few days had passed since he had seen Alexi Kristov destroyed in this very house. It seemed centuries had passed.

Marisa opened the door at his knock, a warm smile of welcome curving her pale pink lips. "Edward!" she said, extending her hand. "Come in."

"Where is he?" Ramsey demanded.

Ignoring Marisa's outstretched hand, he swept past her into the hallway, his angry stride carrying him into the living room.

"What do you want, Ramsey?"

Ramsey pivoted at the sound of the vampire's voice.

Grigori Chiavari glided soundlessly into the room. He exuded an air of self-confidence and invulnerability that Ramsey envied in spite of himself, and never more so than now.

For a moment, the two men looked at each other. They had never been friends. At best, they had been uneasy enemies allied against a common evil. But Alexi Kristov was dead now, his body burned to ashes. But for Grigori's timely but uninvited interference, Ramsey would have been dead, too. Hard to believe he had actually thanked the man for turning him into a monster.

He remembered Marisa asking him, shortly after his transformation, if he would rather be dead. He had replied instantly: Of course I would. But, afterward, he had found himself drowning in a wave of indecision. Confused, dazed by all that had happened that night, he had stumbled out of the house, needing to be alone.

The horror of that night was still fresh in his mind. He and Chiavari had spent months hunting Alexi Kristov, months that had culminated in this very house. He recalled it all so clearly, being caught in the vicious web of Kristov's power, helpless to resist the ancient vampire. Captive to Kristov's will, Ramsey had drugged Chiavari, drained him of enough blood to weaken him, and bound him with heavy silver chains. And then he had waited. Waited for Marisa. She had been surprised to see him. . .