A FIRE IN THE BLOOD is an amazing read with a number of twists and turns and a variety of different beings that keep the action moving. This is a paranormal but with a good bit of contemporary touches, friendships, working and living in the human world, falling in love, and a jealous hateful woman ... but then you have your paranormal side with vampire hunters, vampires, shapeshifters and well ... a jealous hateful woman.

At first I was ambiguous about Tessa, she seems like a nice average woman working at a bank and having lunch with friends, who is thrown into the dark world. She did manage to intrigue me and set me to the mind that she might be perfect for the dark and compelling Andrei, even giving him a few touches of his humanity again. Andrei himself is amazing, managing not to be evil especially after all that has been done to him. Too bad his turning brought into their lives the "jealous woman," whom I disliked immensely for her past sins and for the future attempts on ruining Tessa and Andrei's plans for a future. Luke, Jilly and Bailey are some of the secondary characters that add a lot of life, dialogue and steadiness to the storyline.

I have read a number of books by author Amanda Ashley and I have to say her paranormal's are different ... they have the same types of characters: vampires, shapeshifters, gypsies and hunters but she gives it all a fresh modern touch to their stories.

If you are looking for something that will let you escape into a different world, characters that are intriguing and interesting, and a very sweet yet steamy romance then get your hands on A FIRE IN THE BLOOD.

Miranda at Fresh Fiction said ~
A FIRE IN THE BLOOD by Amanda Ashley is a standalone paranormal romance novel, so it's ideal for readers who may not be familiar with this author. This book is classic Amanda Ashley -- tall, dark, enigmatic stranger with fangs, and a heroine who faces the choice to either embrace immortality or enjoy her immortal lover for a brief time before she dies a human death. Andrei Dinescu is an example of the kind of well-crafted, broody vampire hero Amanda Ashley has been creating before Buffy's Angel graced the small screen, and Stephanie Meyer's Edward set hearts aflame on the big screen. As a fan who has enjoyed Amanda Ashley's recent books that were part of a series, I enjoy this change of pace. Tessa Blackburn is the girl- next-door, working in a bank with her BFF, and completely unaware of the danger headed her way.

Unbeknownst to Tessa, vampires are flocking to her in droves over tales that her blood is like ambrosia for young vampires, and will increase their strength. Enter sinfully sexy vampire Andrei, his evil vampire wife Katerina, and good guy vampire hunter Luke. A FIRE IN THE BLOOD is a fairly straightforward tale of good versus evil with one or two paranormal twists. Andrei intrigued me from the beginning because he initially struck me as being a little bit morally ambiguous, and I was unable to guess his next move. Andrei's vengeful ex Katerina makes a convincing villainess and is a wonderful contrast to the strong heroic female characters in A FIRE IN THE BLOOD. I think Tessa differs from some of Amanda Ashley's previous human heroines because, although Andrei's vampire nature initially creeps her out, she is quick to see the bigger picture and be pragmatic about her situation.

A FIRE IN THE BLOOD 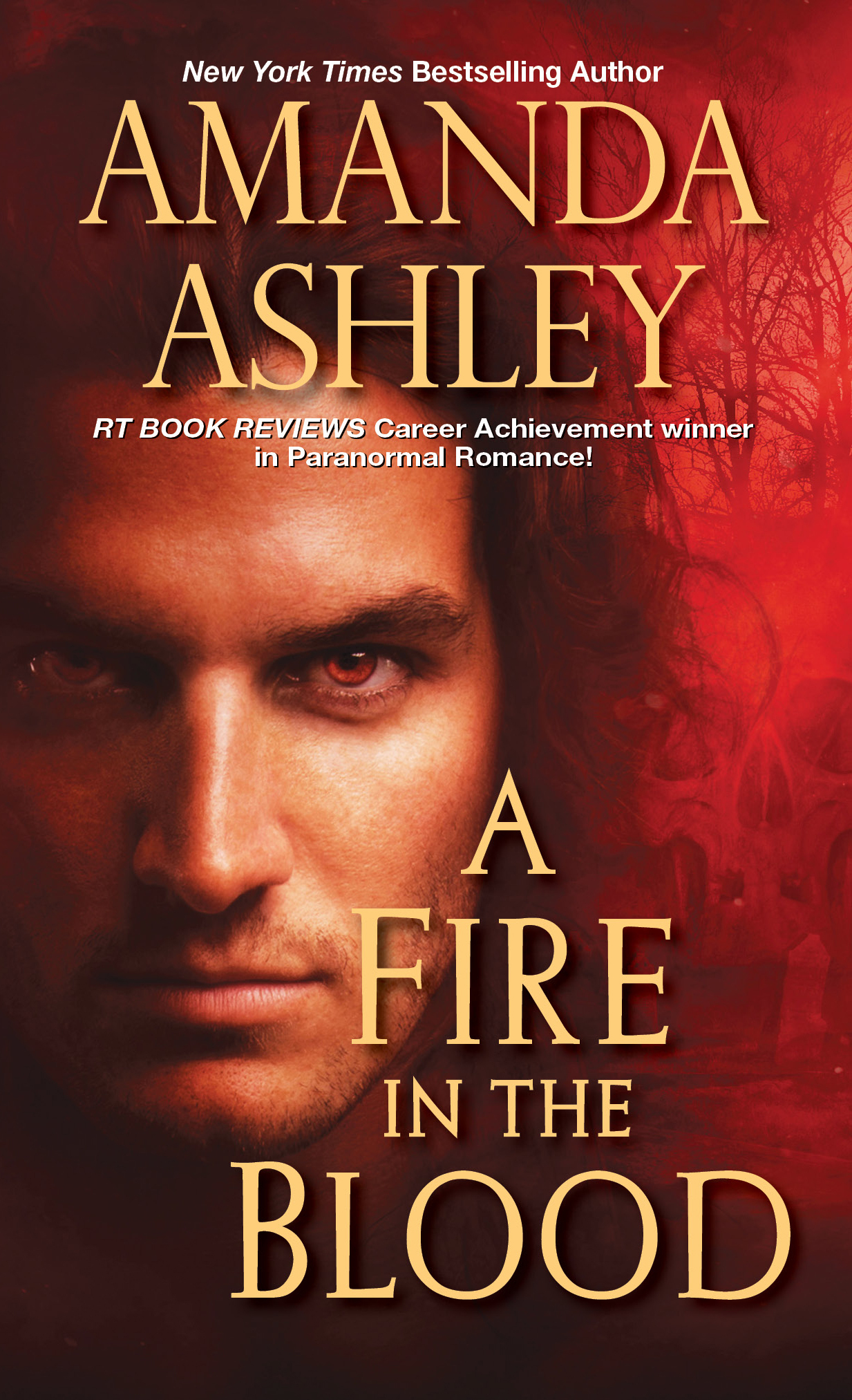 The back cover copy says ~

"I see a man. He is old. Very old. He will come into your life in a moment of danger. He will watch over you and protect you." The gypsy's hand gripped Tessa's tighter. "He will bring you death," she whispered, her voice like the rustle of dry leaves. "And life."

Ten years later, when Andrei Dinescu saves Tessa from a vicious attacker, she has no idea that the handsome stranger the gypsy fortune teller predicted is not a hunter but a seven-hundred-year-old vampire. Darkly powerful, unbelievably compelling, he is obviously pursuing Tessa, but is it her love he's after or her blood?

RT Book Reviews said:
"Romance, passion, and intrigue fill the pages of Ashley's latest story with an enthralling vampire hero that readers will fall in love with. The vampire world is interesting and captivating and will hook readers....the high-stakes tension, the intrigue and fiery, magical passion between Andrei and Tessa will keep fans of Ashley turning the pages."

Tessa shook her head. "Lisa, I am so not going in there. You know I don't believe in all that nonsense."

Tessa stared at the black-and-gold striped tent. It sat a ways off from the rides and food booths. A tripod beside the entrance held a large, hand-lettered sign that read:

Every time the carnival came to town, her cousin, Lisa, nagged Tessa to get her fortune told. Even though she was only thirteen, Lisa, was really big on the paranormal. She read all the Young Adult books about vampires and werewolves, witches and zombies, watched all the movies, but she was too chicken to get her own fortune told, so every time the carnival came to town, she begged Tessa to do it.

She blew out a sigh, knowing Lisa would keep nagging her until she gave in. Might as well just get it over with.

"All right," Tessa said, "but just remember -- you owe me big time for this."

Grinning, Lisa pulled her toward the tent.

A small silver bell chimed when they stepped inside. The interior of the tent was appropriately dim. A small round table covered with a fringed, garish yellow cloth stood in the center of the floor. A pair of non-descript wooden chairs flanked the table.

Tessa stared at the crystal ball in the center of the table. Why had she let Lisa talk her into this?

A dark-skinned woman stepped out from behind a curtain. A bright red, purple, and blue scarf covered her long black hair. She wore a white peasant blouse over a colorful skirt. Tiny bells affixed to the hem jingled softly when she moved.

"How may I help you?" Her voice was deep, husky.

"You seem very young to be concerned about such a thing," the gypsy woman remarked dryly. "How old are you?"

Tessa sat on the edge of one of the wobbly wooden chairs, her hands tightly folded in her lap. Suddenly, this didn't seem like such a good idea.

Tessa placed her left hand in that of the gypsy, flinched when the woman's fingers curled around her own.

The woman bowed her head and closed her eyes.

Tessa glanced over her shoulder at Lisa.

"I cannot see much of your future," the gypsy said, her voice sounding distant. "But I see a man. He is old. Very old. He will come into your life in a moment of danger. He will watch over you and protect you." The gypsy's hand gripped Tessa's tighter. "He will bring you death," she whispered, her voice like the rustle of dry leaves. "And life."

An icy chill ran down Tessa's spine. Jumping to her feet, she grabbed Lisa by the hand and ran out of the tent.

She didn't stop running until she was safely home with the door locked and bolted behind her.

Vampires. Tessa Blackburn shook her head as she scanned the front page of the Cutter's Corner Gazette.

Looking back, it was hard to remember how it started. The first hint of trouble had been a brief story on one of the major news networks. At the time, it hadn't made much of an impression on the citizens of Cutter's Corner, since none of the victims had been residents of the town. Gradually, as stories of people disappearing closer to home, of bodies drained of blood, appeared in the headlines more and more often, the people of Cutter's Corner began to pay attention. It soon became the main topic of conversation at the bank where Tessa worked.

Speculation appeared in local blogs, on Facebook and Twitter. Such postings were frequently accompanied by lurid photos of the deceased and inappropriate comments.

At first, no one in town wanted to say the word out lo

ud, but then, one reporter on a popular cable channel boldly stated that Cutter's Corner had a vampire problem.

Once the word was out in the open, people really began to sit up and take notice.

Had it only been six months ago that the word had first appeared on the front page of the Gazette in bold-face type? At the time, Tessa's immediate reaction had been, Are they kidding? There were no such things as vampires. Everybody knew that.

Vampires were nothing but a myth, scary stories told to frighten children and gullible adults. A staple of old TV shows and spooky tours in New Orleans. Vampires were the villains – and sometimes the heroes -- of numerous movies and books. They sold cereal, and taught kids how to count on Sesame Street. But real? No way!

Since then, every newspaper and magazine across the country – both print and digital - carried warnings for the public to stay inside after dark, and to never, ever, invite a stranger into your home. And at least once a week, the news sources were plastered with a list of the various ways to identify a vampire, as well as the quickest and most efficient ways to destroy them.

Thus far, Tessa counted herself fortunate that, if the creatures did, indeed, exist, she hadn't run across one. At least, she was pretty sure she hadn't. After all, she was still alive.

No one knew how many vampires were in the Corners, what had drawn them to the city, or where they slept during the day.

The city council had issued a bounty of one thousand dollars in gold for every vampire destroyed, so it wasn't surprising that the population of Cutter's Corners had doubled in the last few months as self-proclaimed vampire hunters and greedy tourists armed with wooden stakes and bottles of holy water flocked into town, determined to rid Cutter's Crossing of its infestation while collecting a tidy reward.

"Infestation," Tessa muttered. As if the creatures were no more dangerous than a colony of ants.

She turned to the last page of the Gazette and, sure enough, there were the familiar lists.

How to spot a vampire ~ hairy palms, pale skin, fangs, an aversion to sunlight, crosses, and holy water.

How to destroy a vampire ~ a wooden stake through the heart, beheading, incineration.

"What if the vampire's Jewish?" Tessa mused aloud. "Or Hindu? Or an atheist?"

With a shake of her head, she folded the paper and tossed it on the table, then lifted a hand to her neck, her fingers sliding over the thick silver chain she had taken to wearing whenever she left the house. It was a recent acquisition. Even though she doubted anything would repel a genuine vampire, if such creatures really existed, she had decided to err on the side of caution. The chain was pretty and if it wasn't effective, well, it was still pretty. She also carried a sharp wooden stake in her handbag, just in case. Had she been Catholic, she would have carried a vial of holy water, as well. Again, on the premise of better safe than sorry.

Glancing at her watch, she quickly downed the last of her coffee, grabbed her handbag and keys, and headed out the door.