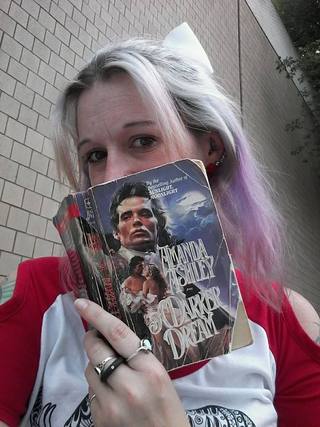 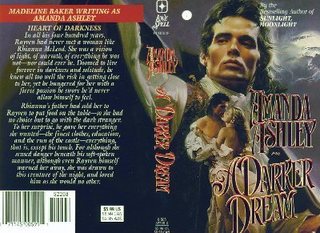 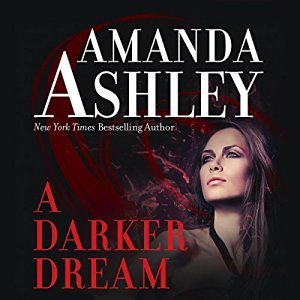 A DARKER DREAM was a finalist in both the PRISM Dark paranormal category, and the Phoenix Desert Rose Chapter's
First Annual Golden Quill Reader’s Choice Award of Excellence


HARRIET KLAUSNER said A DARKER DREAM is a dream of a vampire romance that will enchant fans of the sub-genre. The lead characters and their evolving relationship are filled with passion and reality, a rare combination in supernatural fiction. Amanda Ashley is so convincing in her premise that vampires are real beings suffering from an ailment that mortal love will cure, that readers will conclude that DNA testing would prove that they are part of a species very similar to our own. This novel is a great supernatural romance due to the characters' love for each other and their willingness to sacrifice, even their lives, for their cherished partner. 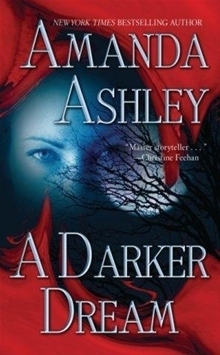 Heart of Darkness
In all his four hundred years, Rayven had never met a woman like Rhianna McLeod. She was a vision of light, of warmth, of everything he was not - nor could ever be. Doomed to live forever in darkness and solitude, he knew all too well the risk in getting close to her, yet he hungered for her with a fierce passion he swore he’d never allow himself to feel.

Rhianna’s father had sold her to Rayven to put food on the table -so she had no choice but to go with the dark stranger. To her surprise, he gave her everything she wanted -the finest clothes, education, and the run of the castle - everything, that is, except his touch. For although she sensed danger beneath his soft-spoken manner, although even Rayven himself warned her away, she was drawn to this creature of the night, and loved him as she would no other.

Chapter 1
I hide in the shadows
and lust for the light
For I am Vampyre
forever imprisoned by the night.


NOSE IN A BOOK said:
I finished this book last night and I must say that it’s my favorite of Amanda Ashley’s yet! To be entirely honest, I find myself liking her works more and more with each book I read. Her characters are eloquently written and the situations are very imaginative. The language is beautiful and I devour her books! The author has a way of keeping to the traditional (almost Bram Stoker-like) vampire while maintaining her own flair. However, this plot was similar to that of Embrace the Night and—though I can’t really describe it—a few of the descriptions reminded me of her short story “Darkfest”. Though, this story still had its own color that kept me riveted. In fact, the book had several poems in it and one of them (the one that is broken up into 6 sections and begins the first 6 chapters) is my favorite!!!

This is the first novel that I have read by Amanda Ashley. It starts off with a poor father who tries to make some extra money for his family by selling his eldest daughter at a gambling club. One of the rich men there is Lord Rayven who is a vampyre and out of pity buys her. The story is set in Victorian times, and the way the characters interact with each other is also true to those times. Rayven and Rhianna fall in love and the whole book is them struggling to be together. If you're looking for something modern then this book is not for you. If you want to read a classic vampyre tale then I recommend you read this book.

I did not see the ending coming. I was really pleased at how it ended. I really enjoyed it. In some ways it reminded me of "Dracula" by Bram Stoker, but only in that it is a classic vampyre tale.
A reader, Nada

I was shopping in the store....and as I passed the book section, I spotted Mandy's book! I couldn't pass it up so, of course, I bought it, adding to my ever-growing collection of Amanda Ashley novels. The thing that I liked most about this story was its historical fiction outlook. Something about former centuries lifestyles eats up my curiousity. Which is what makes this novel good, the subtle vampyrism is just the foundation of the story. It revolves more around the times and the relationship between Rhianna & Rayven than it does on vampyrism.

Rayven's compassion to save Rhianna from public embarassment is just the beginning of proof that he is not the monster he thinks of himself. He provides her with a life of any and every thing she could ever want, and even things she couldn't imagine! Bevins' loyalty is the counterpart of Rayven's compassion. A human who would do anything for the man, or shall I say, vampyre who saved his life.

You constantly read about male vampires, but I was so happy to read, even briefly, Mandy's female vamp, Lysandra, Rayven's sire. Just as I was contemplating the relationship of cat and mouse between Rayven and Rhianna....Amanda writes those exact words! Of all Mandy's vamps I've read about, Rayven seems to have the most trouble coming to terms with who and what he is....The ending was something I have hoped to read from so many vampire novels over the years, and I was finally given it!